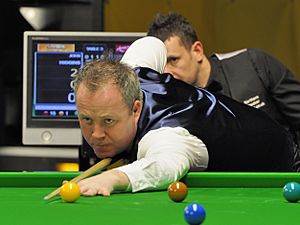 John Higgins (born 18 May 1975) is a Scottish professional snooker player. He has won the World Championship four times. He has also lost in the final four times.

Higgins started his professional career in 1992. Because of a betting scandal in 2010, he was banned for six months, but successfully returned to the World Snooker Tour.

All content from Kiddle encyclopedia articles (including the article images and facts) can be freely used under Attribution-ShareAlike license, unless stated otherwise. Cite this article:
John Higgins Facts for Kids. Kiddle Encyclopedia.