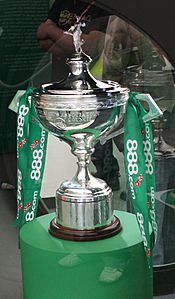 The World Snooker Championship snooker tournament founded in 1927 and since 1977 played at the Crucible Theatre in Sheffield, England. The event is played over 17 days in late April and early May, and is chronologically the third of the three Triple Crown events of the season since 1977–78, when the UK Championship was first held. The event was not held from 1941 to 1945 because of World War II or between 1958 and 1963 due to declining interest.

The best player at the World Snooker Championship was Joe Davis, who won 15 consecutive titles between 1927 and 1946. The record in the modern era, usually dated from 1969 of a knock-out tournament format, rather than a challenge format, is held by Stephen Hendry, who won the title 7 times between 1990 and 1999.

All content from Kiddle encyclopedia articles (including the article images and facts) can be freely used under Attribution-ShareAlike license, unless stated otherwise. Cite this article:
List of world snooker champions Facts for Kids. Kiddle Encyclopedia.