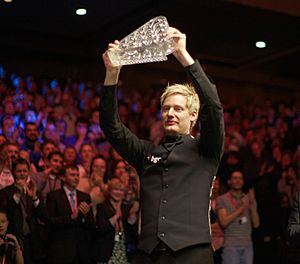 Neil Robertson is an Australian snooker player. He was made champion and put into the top professional ranks in the 2006–07 season.

Robertson is the most successful player from outside the United Kingdom in the sport's history. He plays left-handed.

All content from Kiddle encyclopedia articles (including the article images and facts) can be freely used under Attribution-ShareAlike license, unless stated otherwise. Cite this article:
Neil Robertson Facts for Kids. Kiddle Encyclopedia.