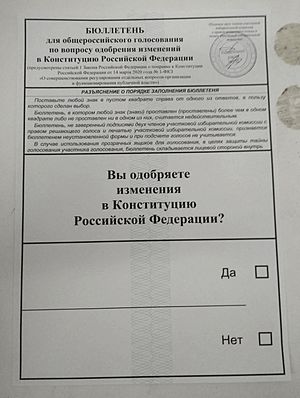 A referendum to reform the Constitution of Russia was held from 25 June to 1 July 2020. President Vladimir Putin proposed the referendum during his address to the Federal Assembly on 15 January 2020.

The referendum is legally referred to as an "All-Russian vote" (Russian: общероссийское голосование), for it is not held in accordance with the Federal Constitutional Law on the Referendum.

The amendments include sweeping changes to the constitution, including allowing Putin to run again for two more six-year presidential terms.

Originally scheduled for 22 April, the vote was postponed to a later date due to the COVID-19 pandemic in Russia. It had been noted that the initial vote date coincided with the 150th anniversary of Vladimir Lenin's birth.

According to official results, 79% of voters supported the changes to the constitution. There have been allegations and reports of irregularities.

All content from Kiddle encyclopedia articles (including the article images and facts) can be freely used under Attribution-ShareAlike license, unless stated otherwise. Cite this article:
2020 Russian constitutional referendum Facts for Kids. Kiddle Encyclopedia.