The world headquarters of IBM had been in a previous 20-story building on this site which opened in January 1938. IBM moved its headquarters to Armonk, New York in 1964 but still needed a facility in New York City. In 1973, the construction of a new IBM building to replace the existing one was permitted by New York City. Its plan included square footage exceeding the legal limitation of allowable floor area but it was accepted because of the bonus for providing benefits of public open space. The original building was demolished starting in 1977. The present building was completed in 1983. It contained public open space as part of a 1961 amendment to the 1916 Zoning Resolution, which allowed architects to create buildings with more square footage if they contained public open spaces.

The building was used by IBM as its Eastern regional headquarters until it was sold to Odyssey in 1994. In following year, the new owner applied to the City Planning Commission for the modification proposal of its atrium. After hearing of arguments for and against the proposal, the public space was altered. Although there were some changes in the atrium such as the removal of a few bamboo trees, additional chairs, and displays of sculpture, it still kept the designation as an oasis in the city. The building and its atrium have been known as one of the most monumental buildings and popular open spaces in the city.

590 Madison Avenue is an office building designed by Edward Larrabee Barnes. It was originally owned by IBM and thus called the "IBM Building". The tower was completed in 1983, and was used by numerous IBM branch offices until it was sold to Odyssey in 1994. The building is still named for IBM, and the global technology firm remains a major tenant. The 41-story building's height reaches 603 feet (184 m). It has a unique wedge shape and an adjacent, privately owned public space covered by a glass structure, which contains resting chairs, tables, and bamboo trees, and is used for pedestrian circulation, resting, amenities, art displays and cultural events. 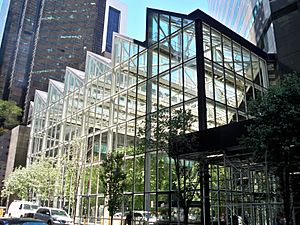 The building is located on the west side of Madison Avenue between 56th and 57th Streets. This context strongly influenced the design of the building. Its wedge shape was intended to avoid too much volume of the building toward 56th Street, which is a relatively narrow street. Instead, Barnes faced the building toward 57th Street and Madison Avenue directly without setback. The space saved by cutting the South West corner of the building allowed the creation of open space at ground level. The open space is connected to 5th Avenue through the atrium in the Trump Tower. Also, a pedestrian arcade is across the block and creates circulation from 57th Street through 56th Street to the Sony Building. The open space of the IBM building not only provides the space to escape from density but also activates the circulation in this area. 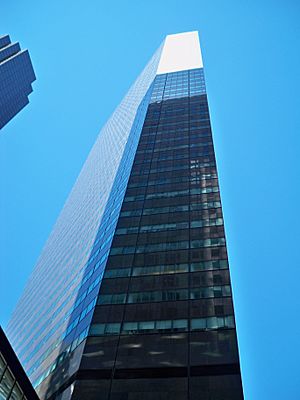 Seen from the south; the chamfer at the southwest corner can be seen at left

The building was designed as a unique wedge shape, with a large chamfer that cuts into the rectangular massing at the site's southwest corner. The volume can be seen differently from different angles. Of the building's 41 stories, most are assigned to office use. At ground level, some retail stores face 57th Street. The building occupies only 40 percent of the property and the rest of the square footage is assigned to public open space. The space is filled with a series of amenities such as food and drink kiosks, tables and chairs, receptacles, etc. Green bamboo trees installed in the space celebrate the serenity of an indoor garden. Also, artwork is displayed inside to entertain visitors. This space is occasionally used for special events.

The exterior of the building is covered by gray green glass and polished granite. The moderately reflective surface keeps changing its texture depending on the angle and the light. The use of transparent glass for the public space emphasizes its openness and lets plenty of sunlight in. The wedge shaped building was a challenge in terms of structure because its shape caused more wind load than that to conventional box shaped skyscrapers. After wind tunnel tests, the original structural design was revised because of the wind load. The frames around the elevator shafts remained as they were, with diagonal frames added. Columns on the perimeter of the building were moved closer by half and the spandrel beams were strengthened. Surprisingly, after redesign of the structure, the total amount of steel required decreased. Another interesting challenge in the structure's design was the cantilevered entrance. The challenge was not how to support the load above, but how to keep the stability of the building. Using stronger and bigger columns for the base solved this problem.

All content from Kiddle encyclopedia articles (including the article images and facts) can be freely used under Attribution-ShareAlike license, unless stated otherwise. Cite this article:
590 Madison Avenue Facts for Kids. Kiddle Encyclopedia.