860–880 Lake Shore Drive is a twin pair of glass-and-steel apartment towers on N. Lake Shore Drive along Lake Michigan in the Streeterville neighborhood of Chicago, Illinois. Construction began in 1949 and the project was completed in 1951. The towers were added to the National Register of Historic Places on August 28, 1980, and were designated as Chicago Landmarks on June 10, 1996. The 26-floor, 254-ft (82 m) tall towers were designed by the architect Ludwig Mies van der Rohe, and dubbed the "Glass House" apartments. Construction was by the Chicago real estate developer Herbert Greenwald, and the Sumner S. Sollitt Company. The design principles, first expressed in the 1921 Friedrichstrasse Skyscraper competition in Berlin and built thirty years later in 860–880 Lake Shore Drive, were copied extensively and are now considered characteristic of the modern International Style as well as essential for the development of modern High-tech architecture.

The towers were not entirely admired at the time they were built, yet they went on to be the prototype for steel and glass skyscrapers worldwide. Initially, it was difficult to acquire financing for the project, turned down by lenders like Baird & Warner, who considered the design scheme to be too extreme. 860–880 Lake Shore Drive Apartments embody a Modernistic tone with their verticality, grids of steel and glass curtain walls (a hallmark of Mies' skyscrapers), and complete lack of ornamentation. Tenants had to accept the neutral gray curtains that were uniform throughout the buildings;no other curtains or blinds were permitted lest they mar the external appearance. Since Mies was a master of minimalist composition, his principle was "less is more" as it is demonstrated in his self-proclaimed "skin and bones" architecture.

Krueck and Sexton Architects of Chicago were commissioned to renovate the historical towers. Teaming up with them were the preservation architects, Harboe Architects along with forensic and structural analysis firm, Wiss, Janney, Elstner Associates, Inc. This team was directed to fix prior renovations done to the buildings. The preceding renovations took away from the historical accuracy of the towers. Architects were assigned to restore the distorted lighting scheme with original translucent glass, replace the deteriorating travertine plaza, which connects the two towers, and exchange for stones with more historical precision. 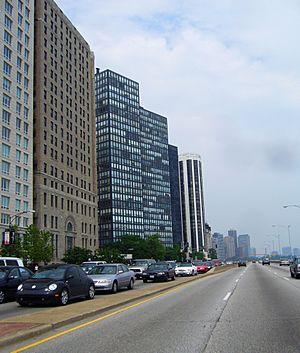 The apartments as seen from Lake Shore Drive 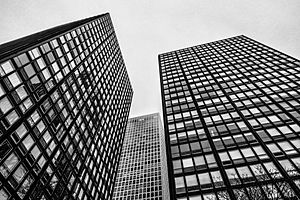 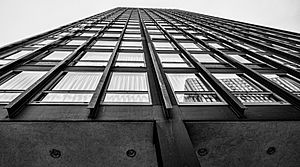 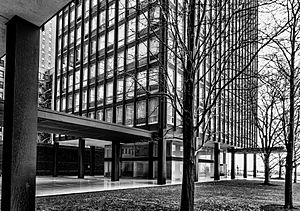 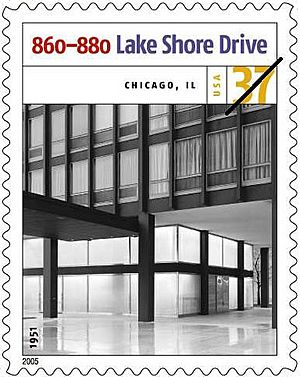 All content from Kiddle encyclopedia articles (including the article images and facts) can be freely used under Attribution-ShareAlike license, unless stated otherwise. Cite this article:
860–880 Lake Shore Drive Apartments Facts for Kids. Kiddle Encyclopedia.