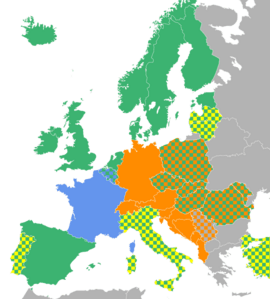 AZERTY is a specific layout for the characters of the Latin alphabet on typewriter keys and computer keyboards. The layout takes its name from the first six letters to appear on the first row of alphabetical keys; that is, (A Z E R T Y). Similar to the German QWERTZ layout, it is modelled on the English QWERTY layout.

It is used by most French and Flemish speakers based in Europe, although France and Belgium each have their own national variations on the layout. Luxembourg and Switzerland use the Swiss QWERTZ keyboard. Most of the residents of Quebec, the mainly French-speaking province of Canada, use a QWERTY keyboard that has been adapted to the French language.

This is how the AZERTY layout differs from the QWERTY layout:

The French AZERTY keyboard also has special characters used in the French language, such as ç, à é, è, and other characters such as &, " ,' ,§, , all located under the numbers.

All content from Kiddle encyclopedia articles (including the article images and facts) can be freely used under Attribution-ShareAlike license, unless stated otherwise. Cite this article:
AZERTY Facts for Kids. Kiddle Encyclopedia.