A Solitary Blue facts for kids 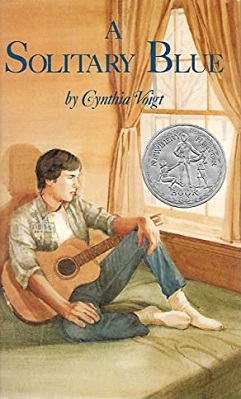 A Solitary Blue (1983) is a novel by Cynthia Voigt. It was a Newbery Honor book in 1984. It is the third book of the Tillerman Cycle, set concurrently with Dicey's Song and Come a Stranger. It revolves around Jeff Greene, a boy who struggles after being abandoned by his mother at age 7.

At 7 years old, Jeff Greene comes home from school to find a note from his mother, Melody Hittinger, telling him that she had to leave for a while and for him to not be sad. Left with his reserved father, the professor, the burgeoning Jeff fails to make human connections. In sixth grade, Jeff catches the flu and tries to hide it from the professor, in hopes of it not disturbing his routine.

That summer, Melody asks him to visit her in Charleston, South Carolina for the summer. He connects with her and has a wonderful time, bringing joy back in his life. After his visit, he writes letters to Melody on the first day of each month, even though she never writes back. For Christmas, he sends Melody a beautiful scarf but receives nothing from her in return. Jeff convinces himself to excuse Melody for ignoring him, and he continues to love her.

On his second summer visit one year later, Melody spends little time with Jeff. Instead, she focuses on a new boyfriend, named Max. The second visit shows Jeff that Melody does not care about him. Frustrated, he buys a boat and goes to a solitary, remote island. There he sees a blue heron and relates it to his own life. When Jeff returns home to Baltimore, he isolates himself.

In eighth grade, Jeff begins to fail his classes and starts skipping classes to ride a local amusement park ride. After his father, Horace, finds out the truth, he decides to make a change for Jeff's good. The two move to a cabin located near Crisfield. Jeff loves the cabin, mainly because he has spotted another blue heron on the property.

Repeating eighth grade at his new school, Jeff makes two good friends, Phil and Andy, gets his life back on track. He takes an interest in schoolwork, and learns how to play the guitar, which fosters a new relationship with his father. These changes underscore Jeff learning to accept himself.

After two years in Crisfield, Jeff meets Mina Smiths, and the Tillermans: Dicey, Sammy, Maybeth, and James. Jeff seduces Dicey with his guitar skills, and soon bonds with Sammy through Dicey's job at a local grocery store, Maybeth when he visits Dicey's house to observe Maybeth's talent, and James through birdwatching.

As Jeff finally forms human connections, Melody abruptly returns to his life and Jeff realizes that he never needed her love in order to be happy.

THEMES: Worry (from Jeff): that his father, like his mother will abandon him. As he reads the note his mother left for him, Jeff cries, wondering why she left. His father realizes, as he tells Jeff, "She's not coming back, you know." (That is the last thing he says to Jeff about his wife for years). Jeff studies his father with the sole purpose of understanding what the Professor wants. Jeff sees this as the best way to be sure of one parent, the Professor, taking care of him. With each passing day, Jeff perfects knowing what kind of home his father wants.

Friendship: For the first few years after Melody leaves home, both Jeff and his father have no intimate relationships. Jeff has no friends other than the Professor, but after a few years, Brother Thomas is invited to dinner. He becomes a friend to Dr. Greene, and soon, to Jeff.

Silent home, failing to communicate: The Professor is a notorious "absent-minded professor" to the point that Jeff misses 4 years of annual check-ups, and never gets dental care after Melody leaves. With the flu, Jeff's temperature soars but there is no thermometer in the house, and his father does not know his pediatrician's name. Other examples of how they share a home, meals and ocean vacations, yet never speak their minds fill the first 2/3 of the story. Breaking this silence, with the help of Brother Thomas, and with Dr Greene's success as an author is heartening to read as the story ends.

All content from Kiddle encyclopedia articles (including the article images and facts) can be freely used under Attribution-ShareAlike license, unless stated otherwise. Cite this article:
A Solitary Blue Facts for Kids. Kiddle Encyclopedia.