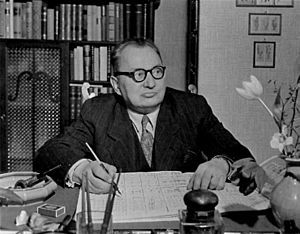 Merikanto was born in 1893. He studied music in Helsinki (1911), Leipzig (1912-1914) and Moscow (1916-1917). He tried composing an opera for the first time when he was 18 years old. The result was Helena, which was completed in early 1912. The opera had one act and its libretto was written by Jalmari Finne. In the 1920s Merikanto created his own modernist style. Merikanto was a professor of composition in the Sibelius Academy, Helsinki from 1951 to his death. Merikanto died of lung cancer in Helsinki in 1958.

All content from Kiddle encyclopedia articles (including the article images and facts) can be freely used under Attribution-ShareAlike license, unless stated otherwise. Cite this article:
Aarre Merikanto Facts for Kids. Kiddle Encyclopedia.