Abbey Connectors are titles by Elsie J. Oxenham that connect into her main Abbey Series They fall into several sub-series, listed here in best reading order, with the Abbey Titles they relate to shown in their place in the mini-series, but without publication details, which are on the main Abbey Series page: 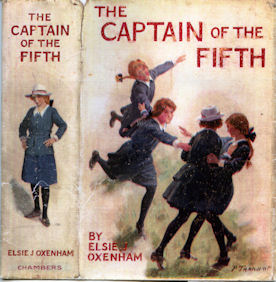 Dustjacket from The Captain of the Fifth, see Swiss Set

The Camp Keema Series introduces Maribel Ritchie (later Marchwood) and Rosalind Firth. The first two books in this series, Crisis in Camp Keema and Peggy and the Brotherhood, are set in a fictionalised Worthing, Sussex. The third, Camp Mystery, is set at Talloires on Lake Annecy, France and introduces Cecily Brown (later Perowne). These three characters enter the Abbey Series in The Abbey Girls Play Up (once more, set mainly in Sussex) and appear again, or are referred to, at intervals later in that series. The publication dates are interesting; Oxenham refers in Abbey Girls Play Up (1930) to events in Cecily Brown's earlier life, which were not fully described until Camp Mystery was published two years later. Indeed, the version of her story given in Play Up, while naturally being simplified – one cannot relate the whole plot in detail when summarising events for a new acquaintance – misses several important features which Oxenham may not have thought of until she actually came to write Camp Mystery, the book that covers these events, a year or two after writing Play Up. Then, four years later again, she returned to the period between Crisis (1928) and Mystery (1932) and wrote Peggy (1936) which fills in events concerning Rosalind's younger brother and sister, John and Gina, as well as introducing new characters Peggy and Sharly, and letting us see more of Maribel's school life.

The Kentisbury Series is much more closely tied into the Abbey Series. Patch and a Pawn introduces Patricia (Patch) Paterson (later Kane), Rhoda, Geoff, Bill and Rosalie Kane, Tansy Lillico and Roger Black. It is set in and around 'Kentisbury Castle', a fictionalised Arundel, Sussex. Rhoda and Rosalie reappear in Rosamund's Tuckshop, also set in Sussex, at Washington. Bill, Patch and Roger reppear in Secrets of Vairy. set at 'Vairy Castle', a fictionalised Knockderry Castle on Loch Long, Scotland. Tansy reappears in Rosamund's Castle, once again set at Washington and Kentisbury/Arundel, and Jandy Mac Comes Back is also set mainly at Kentisbury. Bill and Patch as newly-weds appear in Song of the Abbey; the scenes in which they appear are set at Kentisbury, although the main action of the book takes place at The Abbey in Oxfordshire. These characters are all mentioned in several books in the main Abbey Series published and set after Rosamund's Tuckshop.

The Quellyn/Woodend Series provides an awkward problem of internal chronology within Oxenham's various book series. The main Abbey Series can be dated to within a year or two by events in the real world that are mentioned in Girls of the Hamlet Club, although it is recognised that there are anachronisms in the Retrospective Series. But in The Girl Who Wouldn't Make Friends we are introduced to Robin (Robertina Brent, later Quellyn) and Gwyneth Morgan (later Lloyd) as twelve-year-olds; although the story starts in the London suburbs, most of the action takes place at 'Quellyn' and Nefyn on the Llŷn Peninsula in North Wales. The next part of their story is told in Rosamund's Tuckshop and Rosamund's Castle, both in the main Abbey Series when they are seventeen or so, about five years later in 'Abbey Time', but which were published eighteen and nineteen years later respectively. These two books are set at 'Wood End School' in Washington, Sussex. Robin's romance and marriage are described in Robins in the Abbey, published in 1947, and set mainly in Oxfordshire at 'The Abbey' and at 'Quellyn', but in 1957 Oxenham returned to Robin's school career, and produced New Girls at Wood End, a book about Robin's time as Head Girl, set in the spring following Rosamund's Castle.

The world of 1909, in which 'motors' can be driven across fields and through gated lanes by a twelve-year-old Gwyneth, and where a telegram is brought from the post office in the nearest town by bicycle, contrasts starkly with the air crash that features in Robins in the Abbey and the car accident and BBC news bulletins of New Girls at Wood End – and with the ownership and use of the telephone in the latter two titles as a normal and common feature.

A Go-Ahead Schoolgirl takes place during the World War I at Rocklands School in Yorkshire. The description of the area has more in common with Froggatt Edge in Derbyshire, but Oxenham is well known for her 'translocation' of places to fit the story. It tells of Rena (Andrena) Mackay (later Courtney) and her friend Nancy Morrell, and their time at school. When Rena's father is killed in the War, she must find a career. The headmistress's sister, who owns Rocklands House, helps her, and another friend, Lisabel (Elisabel) Durrant (also later Courtney – they marry brothers), to become gardeners, and sends them to Swanley to train. Tickles tells of a new junior at the School, Tekla (Tickles) and her amazement at the school which moves every spring from Sheffield to the moors at Rocklands and returns each autumn. Jen of the Abbey School – also considered part of the main Abbey Series, continues the story of Tekla's school career and describes how the girls of Rocklands meet Jen Robins (later Marchwood) of the Abbey Series. Rosamund's Victory continues the story of Rena and Lisabel and describes their engagements. Lisabel, by this time married with a baby daughter, also plays a significant role in New Girls at Wood End (see the Quellyn/Woodend series above). Betty McLean, head girl of Rocklands in Tickles and Jen, comes into the main Abbey Series in Abbey Girls at Home and appears or is mentioned in many later titles in that series.

The Rachel & Damaris/Rainbows Series is another example of how Oxenham combines series and characters, weaving in and out of the main Abbey Series. Maidlin to the Rescue was published in 1934, and tells of Maidlin's previously unknown cousins, Rachel and Damaris, and how Maidlin overcomes their resistance to being 'adopted' by her and brings them back to The Abbey. Damaris at Dorothy's, published three years later, returns to the schooldays of Rachel and Damaris and gives the back story of their relationship with Philippa (Pip) Russell, who plays a crucial part in the plot of Maidlin to the Rescue. Damaris Dances was written in response to Oxenham's publishers' wish for a 'ballet book'. Apparently it took several years and many revisions, since Oxenham was not a ballet expert. It covers the period in the main Abbey Series from just before Joy's New Adventure to just after Maidlin Bears the Torch. Rachel and Damaris have a cameo in Two Joans in the Abbey and appear briefly in Abbey Champion as bridesmaids at Maidlin's wedding to Jock Robertson. From Guardians of the Abbey onwards, their characters are fully integrated into the main Abbey Series.

Adventure for Two takes the Rainbows series in a different direction. It takes place partly concurrently with, and just after, Damaris Dances. Two sisters, Daphne and Elsa Dale, make different decisions after the death of their aunt. Daphne continues her ballet training in London, and comes to know Damaris and take part in her ballet 'The Goose Girl'. Elsa returns to 'Hillside', near 'Sandylands' – a fictionalised Uphill, near Weston-super-Mare – to live in the cottage their aunt has left to her. The rest of the series introduces Nancybell Morgan (later Farnham), Margery Paine (later Woodburn), Gilbert and Annamaria Seymour, and the 'Rose sisters'. Pernel Wins and Daring Doranne tie into this series in that the characters in Pernel, Pernel Richard herself, Juliet Joyes and Gwen Baldwin come to live at 'Rainbow Corner' at the beginning of Doranne, and the village Doranne founds, also called 'Rainbows', is where the 'Roses' live, and where Margery Paine comes to make her new beginning. The Roses join the main Abbey Series in Fiddler for the Abbey, and news of the other characters is given in some of the later books in the Abbey Series. Mistress Nanciebel, published in 1910, tells the story of 'the ancestress' of Gilbert and Annamaria Seymour, and of Nancybell Morgan. Here, Oxenham has created a family history for her modern characters by using details from another of her books, published over thirty years earlier. 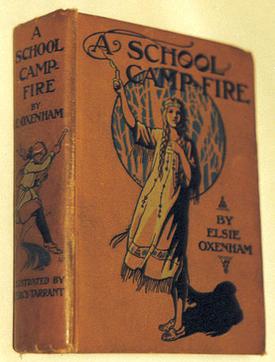 These three sets, Sussex, Swiss and Woody Dean, are closely connected to each other, as may be seen by the titles they share. The village of 'Woody Dean', the setting for the Woody Dean Set, is a fictionalised Rottingdean in East Sussex, and the nearby school may be based on Roedean School. The Sussex Set takes place mainly in Pagham though it is never named, and the cathedral city mentioned in the text as 'Eldingham' must be intended as Chichester. Troubles of Tazy and Patience and her Problems both take place largely in Switzerland, either at the St John's & St Mary's Schools complex where the earlier books in the Swiss Set are based, or in the nearby hostel for girls and ladies, and characters from all three sets appear in these two titles.

A School Camp Fire is another of those titles that Oxenham 'revisited', to take characters and bring them into books she wrote later. Several main characters from it attend Helen Robinson's wedding inSchool of Ups and Downs but it has no connection otherwise, and cannot be said to form part of a real series. As a book, it is in itself split into four sub-sections each of which tells a discrete story, though the characters of Priscilla, Katharine and Dorothy-Anne are present throughout the book.

Characters from the Swiss Set also appear or are mentioned in the Camp Keema Series and in the Abbey Series itself, which gives the only connection these titles have with the main series.

All content from Kiddle encyclopedia articles (including the article images and facts) can be freely used under Attribution-ShareAlike license, unless stated otherwise. Cite this article:
Abbey Connectors Facts for Kids. Kiddle Encyclopedia.