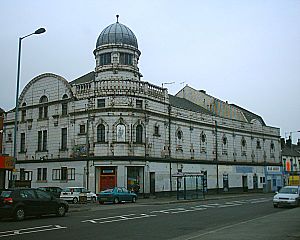 Abbeydale is the segment of the City of Sheffield, England that follows the valley of the river Sheaf. It covers many districts of Sheffield in the south-west of the city running roughly from Heeley Bridge in the district of Heeley to Dore Road between Beauchief and Totley. It is named for the Abbey that existed at Beauchief from the 12th century to 1537.

Although not the official name of any district, many businesses and institutions in the valley use Abbeydale in their name. These include:

All content from Kiddle encyclopedia articles (including the article images and facts) can be freely used under Attribution-ShareAlike license, unless stated otherwise. Cite this article:
Abbeydale, Sheffield Facts for Kids. Kiddle Encyclopedia.