Beauchief and Greenhill facts for kids

Beauchief and Greenhill ward—which includes the districts of Batemoor, Beauchief, Chancet Wood, Greenhill, Jordanthorpe, and Lowedges—is one of the 28 electoral wards in City of Sheffield, England. It is located in the southern part of the city and covers an area of 2.4 square miles (6.2 km2). The population of this ward in 2011 was 18,815 people in 8,882 households.

It is one of the five wards that form the Sheffield Heeley parliamentary constituency.

The districts of this ward were in the historic county of Derbyshire, but they were annexed into the county borough of Sheffield in 1934 associated with the West Riding of Yorkshire and were thus included in the metropolitan county of South Yorkshire in 1974

About a third of the area of the ward is taken up by the grounds of Beauchief Abbey and Beauchief Hall. These include Ladies' Spring Wood, Parkbank Wood, Beauchief Park, and two golf courses. Also within the ward are Hutcliff Wood and Chancet Wood.

Districts in Beauchief and Greenhill ward

Beauchief is a former village that has become a suburb of Sheffield. It lies on a hill above the River Sheaf and the Abbeydale Industrial Hamlet.

Beauchief Abbey was built in 1183 by the canons who had mills on the River Sheaf and a sheep grange on Strawberry Lee. It was named Beau meaning beautiful and chief meaning headland.

The abbey was founded in 1175, Beauchief Abbey was the only Premonstratensian abbey in the West Riding of Yorkshire.

The ruined abbey buildings were dismantled to provide stone for the construction of Beauchief Hall in 1671 with the exception of the bell tower. The tower area was converted into the Pegge family chapel, the interior displays several armorial plaques of Pegge family members.

The carp pond is well known spot for local anglers. The ponds are also frequented by heron and other waterfowl.

Beauchief abbey farm was built around 1700. The farm, as well as its pond, fed the monks.

The path up to Bradway passes near Beauchief Hall.

Beauchief Abbey House is a group of houses on Beauchief Abbey Lane. It is situated at the bottom of the lane in view of the abbey. The barn adjacent to Beauchief Abbey House has been identified as dating from the early 16th century and a modern house in limestone and steel has been built next to the main house. Archaeological work has been made in the grounds of house but not yet been published.

Beauchief Hall is a large manor house on the high ground of Beauchief. The house was built in 1671 by Edward Pegge of the Ashbourne family who had acquired the estate by marriage to Gertrude Strelley in 1648. Pegge served as Sheriff of Derbyshire in 1667 whilst resident in Pegge's cottage the house adjacent to the current hall. A fireplace in the hall shows a bust of Edward Pegge with the arms of the Pegge and Strelley families, the fireplace is said to have been a gift from the Mundy family.

The hall and grounds passed from the family with the sale of the property by Edward Strelley Pegge Burnell in 1923. Ending Joseph Hunters statement in Hallamshire 1819 that "We have in this family an instance, which by some has been supposed rare, of the direct descendants of the original grantee possessing and residing upon the abbey-lands granted to their ancestor"

Since 1923 the house has served as a school (De la Salle College), In 1958, the Hall and grounds were acquired by the De La Salle College, the grounds being used as playing fields for the college boys. For six years, the Hall was on lease to the Beauchief Independent Grammar School for Girls, a hotel and currently as headquarters of a software company. On 3 August 2010 it was announced to the stock exchange that the hall would be sold by the PLC software company in a multimillion-pound deal. The new owners are believed to be Blenheim ltd

Greenhill is a suburb of Sheffield, England. Nearby settlements include Bradway, Meadow Head, Abbeydale and Woodseats.

Greenhill, generally pronounced "grennell" or "green hill" if you lived there or in Bradway, has a library, primary school, church and shops. There are also several bus routes which service the area including the 76, 86, 25, 25A, M17 and 293; the last service of which even goes into Derbyshire.

Lowedges has some 3,000 homes and is located at the southern edge of the city on the boundary with Derbyshire. Lowedges is formed of council and private houses and flats as well as a good selection of shops and one public house, The Grennel Mower. It is home to the Transport Recreation Ground, Lowedges Fire Station, Greenhill Park, Greenhill and Bradway Youth Club, a Tenants' Meeting Hall and three churches. Lowedges is a very vibrant community with over fifty activities for residents to engage in.

The original name "Lowedges" was given to a farm located on the east side of the Sheffield to Derby Turnpike, now called Chesterfield Road. The farm itself was made up of several strips, located on both sides of the Turnpike which had in their names the word Lowedge. "Lowedge" in this context, is a description rather than a name, "low" being the Derbyshire name for a hill and "edge", meaning just that, a strip on the edge of a hill or low. Renting some of these strips and bring them together into a single farming unit would have prompted the tenant, one William Webster, to call this new farm "Lowedges".

A map of Greenhill derived from a survey made by W & J Fairbank in 1804 and 1805 shows and names the strips. Five of the seven strips rented by William Webster include the word Lowedge. In addition the map depicts a "Lowedge Lane" running adjacent to the east of those strips. In total there are nine fields shown with Lowedge in their name. The strip names were made up of an additional descriptor, such as "Long", "Top", "Nether", "Upper", "Five Acre" and "Four Acre". It is possible that more strips existed to the east of Lowedge Lane, that being the eastern extent of the map. The map is available from Sheffield City Libraries.

A single row of terrace houses along the west side of the southern part of Chesterfield Road forms one of the most southerly groups of buildings in Sheffield, and is the second place to carry the name Lowedges. This terrace of houses was built between 1905 and 1910 when Lowedges Farm still existed. When the terrace was built the name Lowedges became the name of this hamlet, including both the farm and the houses. 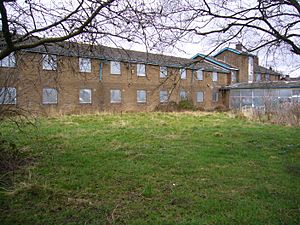 Local Transport - First South Yorkshire 76 (Meadowhall - Lowedges via. City Centre) and 24 (Woodhouse - Lowedges - Bradway via City Centre but only goes to Bradway evenings and all day Sunday) terminate at Lowedges Terminus. These are high frequency buses during day time.

Batemoor is a housing estate in the south of Sheffield. It is located to the southeast of Greenhill and borders Lowedges, Norton, Jordanthorpe and Dronfield.

The estate was built circa 1964, and consists largely of prefabricated flat-roofed housing, along with blocks of maisonettes/flats.

It borders on the Derbyshire countryside and farming country, being only a couple of miles from the villages of Coal Aston and Holmesfield and on the edge of the town of Dronfield.

The estate is served by a main bus route, and a newly built Infant & Junior school. It is also near the Jordanthorpe Shopping Centre.

Sheffield Artist Pete McKee grew up on Batemoor and still lives in the area.

Main roads lead to the M1 motorway, and Dronfield railway station is nearby.

Jordanthorpe is located to the east of Greenhill and south of Norton.

All content from Kiddle encyclopedia articles (including the article images and facts) can be freely used under Attribution-ShareAlike license, unless stated otherwise. Cite this article:
Beauchief and Greenhill Facts for Kids. Kiddle Encyclopedia.