Abbeydale and Abbeymead facts for kids 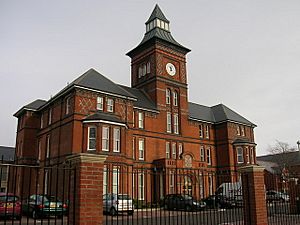 Abbeydale and Abbeymead are modern suburbs of the city of Gloucester in the county of Gloucestershire, England. They lie approximately 3 miles south-east of the city centre, and are bounded by the suburbs of Coney Hill to the north west, Barnwood and Hucclecote to the north and north east, Matson to the south west and the M5 motorway to the south and east. Mostly connected with Segregated Bicycle Paths into Gloucester city along Metz Way. The village of Upton St Leonards is directly across the M5 motorway.

The two suburbs are contiguous and share many amenities but there is clear definition of where Abbeydale ends and Abbeymead begins.

Most of the Abbeydale area was green fields until around 1970, when the Heron Park development was constructed by Heron Homesteads. At that stage it was officially known as "The Land to the East" 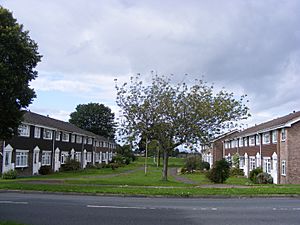 An example of Radburn design housing in Abbeydale, with Redpoll Way (left) facing Redstart Way across a green space. Road access is to the rear of the houses.

The first two-thirds of Heron Park appears to have been designed in accordance with the Radburn model. It consists of loops and cul-de-sacs radiating from a central spine road, Heron Way, giving access to the rear of the houses where there are garages and hard-standings. The houses face each other across interconnecting pathways and green spaces, so that pedestrians are largely separated from traffic. In keeping with the developer's brand name, the streets were named after British birds. The area is almost identical to a Heron development in Yate, South Gloucestershire which was built around the same time and even has its own Heron Way. Later parts of Heron Park, such as Hawthorne and Bittern Avenues, were not built to the Radburn model.

In 1975, contracts were signed for the construction of Heron Primary School, which opened in 1977.

The Glevum Way Shopping Centre opened in 1981, with a Safeway supermarket and a handful of small shops. A pub, the Ridge & Furrow, was also built by Courage. Over the following few years, a community centre, a doctor's surgery, a pub (the Ridge & Furrow, operated by Courage) and a veterinary clinic were built beside the centre. In 1983, the Safeway store was damaged by fire. In 2005, the shopping complex was demolished to make way from a new, larger Morrisons store. The pub was closed by Morrisons around 2012, to make way for a petrol station which was turned down by planners and is currently up for sale (Summer 2016).

The second half of what became known as Abbeydale, was started around 1976, with further development on land between Heron Park and the M5. These homes were constructed by the Robert Hitchins and Glevum Estates building companies and are distinguished from Heron Park by their more conventional layout and different house designs. Most houses face the road, have front driveways and garages, and are similar to those built by the same companies in Quedgeley. These developments, which lie either side of Wheatway, were completed around 1982-1986. When the road, Wheatway, was built, it bisected The Wheatridge and the part nearest the M5 motorway was called The Wheatridge East. This newer part of Abbeydale is separated from the older Heron Park by The Wheatridge - a lane of former farmworkers' cottages and larger country houses leading from Painswick Road (B4073). Around 1983, plots of land at the top of The Wheatridge were sold for the construction of individually designed homes and a small housing development. A small church, Christchurch, Abbeydale, was built and opened in 1995.

From 1986, further housing development began on farmland between Abbeydale and Barnwood and became known as Abbeymead. It was connected to Abbeydale with the construction of its main artery, Abbeymead Avenue, designated the Eastern Radial Road, a high speed roadway into Gloucester, which was to have had a flyover across Eastern Avenue; never built. To cater for road safety, with an original speed limit of 50mph, no houses on Abbeymead Avenue actually face directly on the road. Smaller, piecemeal developments have continued to be added, turning Abbeymead into one of the more populous suburbs of the city. Lobleys Drive is an important spine road off Abbeymead Avenue, leading, over the M5, into Coopers Edge development and Brockworth Trading Estate.

The biggest shopping outlet, next to Heron Way (Abbeydale) has five shops in addition to the Morrisons supermarket, Lloyds Pharmacy, Taylors (Estate Agents), Ruby Cantonese/Dave's Fish & Chip shop , Coral Betting Shop, plus Sue Ryder Care charity shop. Nearby is the Ridge & Furrow Pub which is now closed and straight across Abbeymead Avenue are several other small retail units. Heron Primary School and Abbeymead Primary School are the only two schools in the area and both serve 4 to 11 year olds. Part of the shopping complex includes a community centre with an all-weather pitch. Nearby is also a children's playground.

Further along Abbeymead Avenue, in Abbeymead, is another pub, called The Turmut Hoer, and a small row of shops, a Tesco Express, hairdresser, two estate agents, fish & chip shop and The Polash Indian restaurant.

Among its many open spaces is a skateboarding amenity, Clock Tower Park and, further away, a local nature reserve at Hucclecote Meadows, which has been designated as a Site of Special Scientific Interest (SSSI).

As the area is now virtually fully built up, it is unlikely that Abbeydale/Abbeymead will see any real expansion. Large-scale residential development is in progress, however, at Brockworth, on the other side of the M5 motorway, linked from Abbeymead Avenue by Lobleys Drive. Nearby is also a large business park, on the site of the old Brockworth Aerodrome.

The whole area is served by several frequent bus routes operated by Stagecoach West, the 2, 2A, 8 and 13.

All content from Kiddle encyclopedia articles (including the article images and facts) can be freely used under Attribution-ShareAlike license, unless stated otherwise. Cite this article:
Abbeydale and Abbeymead Facts for Kids. Kiddle Encyclopedia.