Abbot of Gloucester facts for kids 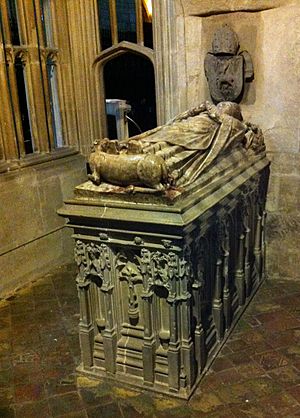 The Benedictine abbey was founded about 1022 and was dedicated to Saint Peter. It is recorded that the abbey lost about a quarter of its complement of monks in 1377 due to the Black Death.

In 1540, the abbey was dissolved by King Henry VIII, and it became Gloucester Cathedral the following year.

All content from Kiddle encyclopedia articles (including the article images and facts) can be freely used under Attribution-ShareAlike license, unless stated otherwise. Cite this article:
Abbot of Gloucester Facts for Kids. Kiddle Encyclopedia.