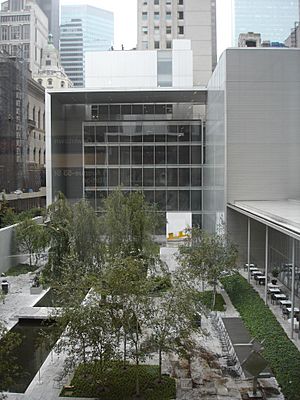 The Abby Aldrich Rockefeller Sculpture Garden is an outdoor courtyard at the Museum of Modern Art in Manhattan, New York City. Designed by notable architect Philip Johnson, the courtyard was conceived at the same time as Johnson's West Wing annex for the museum. Construction began in the spring on 1952 and was completed in April 1953.

Throughout its history, the garden has served as the temporary setting for notable artworks including Alexander Calder's Black Widow (1959), Anthony Caro's Midday (1960), Pablo Picasso's She-Goat (1950), as well as providing a space for innovative exhibitions like 8 AUTOMOBILES (1951) and Italy: The New Domestic Landscape (1972).

All content from Kiddle encyclopedia articles (including the article images and facts) can be freely used under Attribution-ShareAlike license, unless stated otherwise. Cite this article:
Abby Aldrich Rockefeller Sculpture Garden Facts for Kids. Kiddle Encyclopedia.