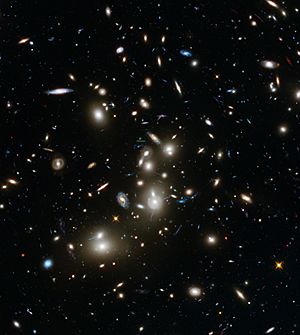 Abell 2744, nicknamed Pandora's Cluster, is a giant galaxy cluster resulting from the simultaneous pile-up of at least four separate, smaller galaxy clusters that took place over a span of 350 million years. The galaxies in the cluster make up less than five percent of its mass. The gas (around 20 percent) is so hot that it shines only in X-rays. Dark matter makes up around 75 percent of the cluster's mass.

This cluster also shows a radio halo along with several other Abell clusters. It has a strong central halo, along with an extended tail, which could either be relic radiation, or an extension of the central halo.

Renato Dupke, a member of the team that discovered the Cluster, explained the origin of the name in an interview: “We nicknamed it ‘Pandora's Cluster’ because so many different and strange phenomena were unleashed by the collision.”

All content from Kiddle encyclopedia articles (including the article images and facts) can be freely used under Attribution-ShareAlike license, unless stated otherwise. Cite this article:
Abell 2744 Facts for Kids. Kiddle Encyclopedia.