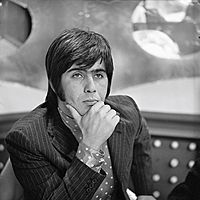 Abi Ofarim, born Avraham Reichstadt (5 October 1937 – 4 May 2018) was an Israeli singer, musician and dancer. He was born in Safed, Mandatory Palestine. In 1961, he married Esther Ofarim, his musical duo. Their greatest success in Germany came the next year with "Morning of my Life", written by the Bee Gees. In 1968 "Cinderella Rockefella" hit the top of the charts in a number of countries including the UK.

All content from Kiddle encyclopedia articles (including the article images and facts) can be freely used under Attribution-ShareAlike license, unless stated otherwise. Cite this article:
Abi Ofarim Facts for Kids. Kiddle Encyclopedia.