Interior of the brewery

The company brews its beer with water from artesian wells. In August 2005, Stuff Magazine called Abita's Turbodog Ale the best beer made in America. Abita Bock was listed among the Top 10 Spring Beers by Fox News in 2012. Abita Bock is the brewery's first seasonal brew and is available January - March.

Turbodog, a brown ale, produced by the Abita Brewing Co.

The Boot on the bottling line

Abita's flagship beers are sold in 46 US states and Puerto Rico. Abita Brewing Company was the 15th largest Craft Brewery and the 24th largest brewery of any category in the United States ranked by volume sold in 2010.

In February 2012, the company began distribution of three of its flagship brews in cans: Amber, Purple Haze and Jockamo I.P.A.

In 2015, Abita became the first craft beer available in Aruba, exclusively distributed by Bourbon Express and currently by Divino N.V. per April 2018. As from February 2016, Turbodog, Wrought Iron IPA and the Abita Root Beer are also available in Germany.

Abita beer is currently served at Disney's Port Orleans Resort, a hotel/resort located in Walt Disney World in the Orlando, Florida area. The resort, themed after New Orleans, serves Abita on tap at restaurants and bars on site.

The Abita Brew Pub, under independent ownership, is located at the original brewery location in Abita Springs and features Abita beers, with some brews exclusive to the brew pub, under a close partnership with the brewery.

The company also produces Abita root beer, which differs from many others in that it is made with Louisiana sugarcane rather than high-fructose corn syrup. 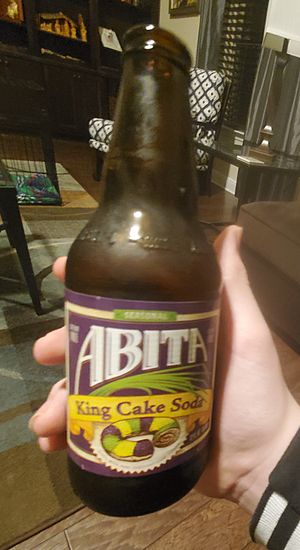 A picture of one of Abita's non alcoholic offerings

All content from Kiddle encyclopedia articles (including the article images and facts) can be freely used under Attribution-ShareAlike license, unless stated otherwise. Cite this article:
Abita Brewing Company Facts for Kids. Kiddle Encyclopedia.