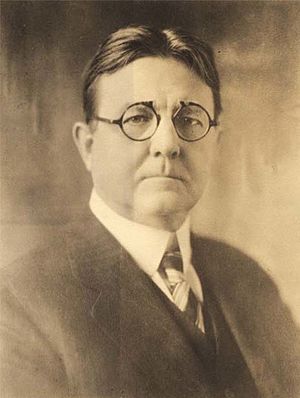 Abraham Cressy Morrison (1888-1951) was an American chemist. He was President of the New York Academy of Sciences.

He was known to his close friends as "Cressy". His wife was the former Marguerite Snow of New York. He loved to fish and entertain at their summer home on Deer Isle, south of Bangor, Maine.

Morrison published a book called Man in a Chemical World: The Service of Chemical Industry (New York: Scribner's Sons, 1937). It is a work on science for the general reader. He is better known for his book Man Does Not Stand Alone, which was published in 1944. His largest work was The Baking Powder Controversy (New York: American Baking Powder Association, 1904–07). This is a work in two volumes on the history of the baking powder industry in the U.S.

All content from Kiddle encyclopedia articles (including the article images and facts) can be freely used under Attribution-ShareAlike license, unless stated otherwise. Cite this article:
Abraham Cressy Morrison Facts for Kids. Kiddle Encyclopedia.