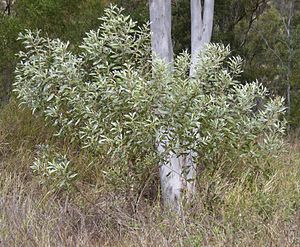 The species was first formally described by the botanist Allan Cunningham in 1832 as part of George Don's work A General History of Dichlamydeous Plants. It was reclassified as Racosperma holosericeum in 1987 by Leslie Pedley then transferred back to genus Acacia in 2006. Other synonyms include; Acacia holosericea var. glabrata, Acacia holosericea var. multispirea and Acacia mangium var. holosericea. The type specimen was collected by Allan Cunninham in 1819 near Port Keats on the edge of the Cambridge Gulf.

A. holosericea is available for cultivation by seed, although the seeds must be scarified prior to planting. It grows quickly and well in a sunny, reasonably well drained position in most soil types. It is suitable as a feature plant or as a hedge or screen plant. It has attractive foliage and fruit and can be grown in tropical areas.

Indigenous Australians used the plant as a fish poison. The seeds of the plant are known to be edible.

All content from Kiddle encyclopedia articles (including the article images and facts) can be freely used under Attribution-ShareAlike license, unless stated otherwise. Cite this article:
Acacia holosericea Facts for Kids. Kiddle Encyclopedia.