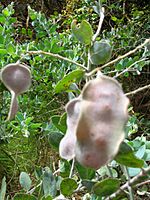 Acacia podalyriifolia is a perennial tree which is fast-growing and widely cultivated. It is native to Australia but is also naturalised in Malaysia, Africa, India and South America. Its uses include environmental management and it is also used as an ornamental tree. It is very closely related to Acacia uncifera. It grows to about 5 m (16 feet) in height and about the same in total width. It blooms during winter.

The tall shrub or small tree typically reached a height and width of around 2 to 6 m (6 ft 7 in to 19 ft 8 in). Like most species of Acacia it has phyllodes rather than true leaves. It has grey coloured, smooth or finely fissured bark with terete and hairy branchlets that are often covered with a fine white powdery coating. The silver-grey to grey-green coloured phyllodes have a broadly elliptic to ovate shape and a length of 2 to 5 cm (0.79 to 1.97 in) and a width of 10 to 25 mm (0.39 to 0.98 in) and have hairs on margins and a prominent midvein. It blooms throughout they year producing simple inflorescences in groups of 8 to 22 along an axillary raceme with an axis length of 2 to 11 cm (0.79 to 4.33 in) with spherical flower-heads that have a diameter of 5 to 8 mm (0.20 to 0.31 in) and contain 15 to 30 bright golden flowers.

The species was first formally described by the botanist George Don in 1832 as part of the work General History of Dichlamydeous Plants. It was reclassified as Racosperma podalyriifolium by Leslie Pedley in 1987 then transferred back to genus Acacia in 2014. Other synonyms include Acacia podalyrifolia.

All content from Kiddle encyclopedia articles (including the article images and facts) can be freely used under Attribution-ShareAlike license, unless stated otherwise. Cite this article:
Acacia podalyriifolia Facts for Kids. Kiddle Encyclopedia.