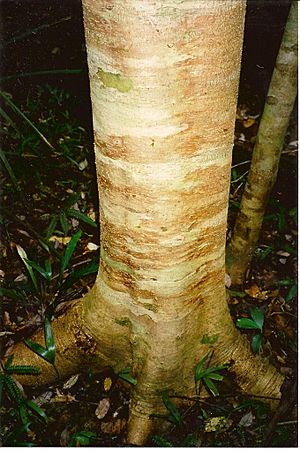 Acradenia euodiiformis, commonly known as yellow satinheart or bonewood, is a species of tree that is endemic to eastern Australia. It has mostly trifoliate leaves, the leaflets narrow elliptic to lance-shaped, with prominent oil glands, and panicles of white flowers. It grows in and near rainforest.

Yellow satinheart was first formally described in 1875 by Ferdinand von Mueller in Fragmenta phytographiae Australiae. Mueller gave it the name Bosistoa euodiiformis from specimens collected near the Clarence River by Mary Anne Wilcox. In 1977, Thomas Gordon Hartley changed the name to Acradenia euodiiformis in the Journal of the Arnold Arboretum.

Acrodenia euodiiformis grows in and on the margins of rainforest and is found naturally from the McPherson Range in south-eastern Queensland to the Hunter River in New South Wales at altitudes of 60–1,200 m (200–3,940 ft). It is often seen in rainforests as an understorey tree, particularly on poorer sedimentary soils and along creeks, but sometimes on the more fertile basaltic soils and at relatively high altitudes.

All content from Kiddle encyclopedia articles (including the article images and facts) can be freely used under Attribution-ShareAlike license, unless stated otherwise. Cite this article:
Acradenia euodiiformis Facts for Kids. Kiddle Encyclopedia.