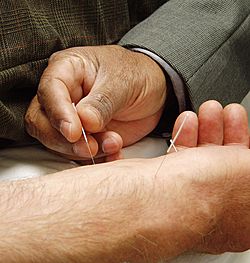 Needles being inserted into a person's skin 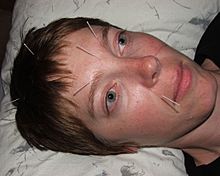 Acupuncture needles in a person's face

Acupuncture is an ancient kind of medical treatment where the doctor sticks needles in certain places of a person's body. The oldest records are at least 2,500 years old. Thin metal needles are pushed into the body at certain places called "acupuncture points". It is a form of alternative medicine, and a key part of Traditional Chinese medicine (TCM). It uses the Chinese philosophy of yin and yang.

There is no general agreement as to whether acupuncture is effective. It is difficult to do good research on this issue.

A 2014 review article said "researchers usually find that it generally does not matter where the needles are inserted, how often (that is, no dose-response effect is observed), or even if needles are actually inserted. In other words, 'sham' or 'placebo' acupuncture generally produces the same effects as 'real' acupuncture and, in some cases, does better". A 2013 analysis found little evidence that the effectiveness of acupuncture on pain (compared to sham) was modified by the location of the needles, the number of needles used, the experience or technique of the practitioner, or by the circumstances of the sessions.

Recently, acupuncture has begun to be used more frequently in the West. In the United States acupuncture has often been used to help control pain and drug and alcohol addiction. It is also often used to treat headaches, asthma, and arthritis. It is widely agreed that acupuncture treatment is safe when done by well-trained doctors using clean needles.

All content from Kiddle encyclopedia articles (including the article images and facts) can be freely used under Attribution-ShareAlike license, unless stated otherwise. Cite this article:
Acupuncture Facts for Kids. Kiddle Encyclopedia.