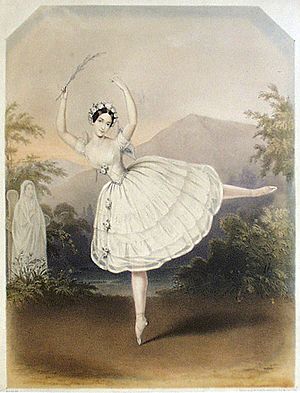 Hand-colored lithograph dated 1843 by Jules Bouvier of Adèle Dumilâtre as Myrtha in Giselle (Collections of the Victoria and Albert Museum, London)

Adèle Alphonsine Dumilâtre (30 June 1821—4 May 1909) was a French ballerina associated with the romantic ballet. She was born in Paris to Michel Dumilâtre, an actor in the Comédie-Française. He hoped she would become a tragedienne, but her dance talent led her to the ballet of the Paris Opéra. She performed from 1840 to 1848. She rose quickly from minor parts to principal roles. At eighteen she danced La Sylphide. She created the roles of Myrtha in Giselle and the title role in Lady Henriette. Rich gentlemen sustained her power at the Opéra. She danced in Milan and London where she created the title role in The Marble Maiden (1845) by Arthur Saint-Léon. She married Louis Drake y del Castillo in 1848 and bore him three children. She died in Paris and was buried in the Montmartre Cemetery. Her older sister Sophie was also a prominent Parisian ballerina.

All content from Kiddle encyclopedia articles (including the article images and facts) can be freely used under Attribution-ShareAlike license, unless stated otherwise. Cite this article:
Adèle Dumilâtre Facts for Kids. Kiddle Encyclopedia.