Adam Nergal Darski (10 June 1977) in Gdynia, Poland) is a Polish musician and celebrity who is best known for being in the black/death metal band Behemoth. He is the vocalist for Behemoth and plays the guitar, bass, synthesizer and drums.

Since 2014, Darski has been the co-owner of a barbershop in Warsaw, Poland. In 2015 he opened a second barber shop in Warsaw and bar in Sopot. 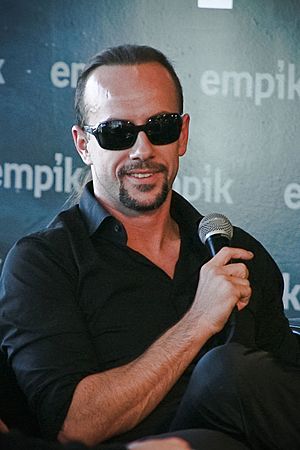 Darski was born Adam Michał Darski in Gdynia, Poland. He was raised Catholic and began to play the guitar at age eight.

He likes to call himself Nergal (which comes from Babylonia mythology). He founded the band Behemoth while he was just a teenager in 1991. Darski also is the main lyricist, composer and manager of the band. He was a member of a band called Wolverine, which showed his skills at clean singing.

Darski has completed six years of history at the University of Gdańsk. He is qualified to be a museum curator.

In 2011, he became a judge on season one of The Voice of Poland.

In July 2012, Nergal became the newest spokesman for Demon Energy drinks that would be sold all throughout Poland. Nergal appeared in his full Behemoth attire on the front of four different flavors of the Demon Energy brand next to the brand's slogan of "No Limits, No Laws". Darski reportedly donated all of the money he earned for his placement to one of the world's best bone marrow donor centers.

Darski was rushed to the hospital in 2010 for unknown reasons. All upcoming Behemoth live shows were cancelled. On 24 August 2010, Darski was diagnosed with leukemia. His then-fiancée offered to donate her marrow, but his marrow didn't match.

On 8 November 2010, Darski found a genetic bone marrow match, and he then underwent treatment to receive a bone marrow transplant. He was let out of the hospital on 16 January 2011.

All content from Kiddle encyclopedia articles (including the article images and facts) can be freely used under Attribution-ShareAlike license, unless stated otherwise. Cite this article:
Adam Darski Facts for Kids. Kiddle Encyclopedia.