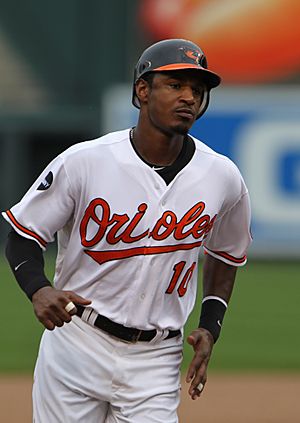 The Mariners selected Jones in the first round of the 2003 MLB draft. He came up in the Mariners' minor league system as a shortstop before changing to the outfield. He made his MLB debut with the Mariners in 2006. He was traded to the Orioles before the 2008 season. Jones is a five-time MLB All-Star, a four-time Gold Glove Award winner, and a Silver Slugger winner.

All content from Kiddle encyclopedia articles (including the article images and facts) can be freely used under Attribution-ShareAlike license, unless stated otherwise. Cite this article:
Adam Jones Facts for Kids. Kiddle Encyclopedia.