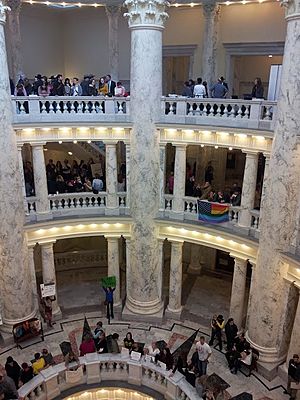 A mass demonstration on Presidents Day 2014 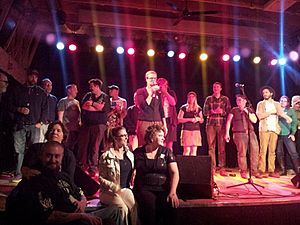 Nicole LeFavour, speaking at a bail benefit held at the Visual Arts Collective, presents a few of the activists who had been arrested

Add The Words, Idaho is an LGBT activist group and political action committee (PAC) in the United States, extant since 2010, which advocates adding the words "gender identity" to the state's human rights act; this group grew out of several others which had been advocating the same. After eight years, however, such a proposed bill had never even been allowed to be filed by the Republican-majority legislature for a hearing, whereupon an associated all-volunteer direct action group, Add The 4 Words Idaho, under the leadership of former state senator Nicole LeFavour, undertook a series of civil disobedience protests beginning on February 3, 2014 at the Statehouse.

All content from Kiddle encyclopedia articles (including the article images and facts) can be freely used under Attribution-ShareAlike license, unless stated otherwise. Cite this article:
Add The Words, Idaho Facts for Kids. Kiddle Encyclopedia.