The Idaho State Capitol in Boise is the home of the government of the U.S. state of Idaho. Although Lewiston briefly served as Idaho's capital from the formation of Idaho Territory in 1863, the territorial legislature moved it to Boise on December 24, 1864.

Construction of the first portion of the capitol building began in the summer of 1905, fifteen years after statehood, and the architects were John E. Tourtellotte and Charles Hummel. Tourtellotte was a Connecticut native whose career began in Massachusetts and skyrocketed further when he moved to Boise. Hummel was a German immigrant who partnered with Tourtellotte in 1901. The final cost of the building was just over $2 million; it was completed in 1920. The architects used varied materials to construct the building and their design was inspired by Classical examples. Its sandstone exterior is from the state-owned quarry at nearby Table Rock.

The building was included in the Boise Capitol Area District listing on the National Register of Historic Places on May 12, 1976.

Construction of the original building 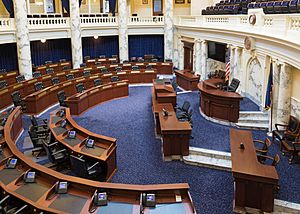 Chamber of the House of Representatives in 2018

Tourtellotte and Hummel used four types of marble: red marble from Georgia, gray marble from Alaska, green marble from Vermont, and black marble from Italy. Architectural inspirations included St. Peter’s Basilica in Rome, St Paul's Cathedral in London and the U.S. Capitol in Washington, D.C. The most prominent feature of the capitol is its dome. Surmounting this dome is a bronze eagle, 5 feet 7 inches (1.70 m) tall. The capitol building is 208 feet (63 m) high, occupies an area of 201,720 square feet (18,740 m2), and contains over 50,000 square feet (4,600 m2) of artistically carved marble.

There are 219 pillars in the original building – Doric, Corinthian, or Ionic – and each pillar is made up of marble dust, plaster and scagliola. Scagliola is a mixture of granite, marble dust, gypsum and glue dyed to look like marble. This artificial marble was created by a family of artisans in Italy.

On the first floor of the capitol building, when looking upward to the dome, 13 large stars and 43 smaller stars can be seen. The 13 large stars represent the thirteen original colonies and the 43 smaller stars indicate that Idaho was the forty-third state to enter the union. The floor contains a compass rose; in its center is a sundial that has minerals found in Idaho. The first floor also houses a statue called the Patriot by Kenneth Lonn, for those who worked in the mining industry.

The second floor may be accessed via three entrances; from the east, south, and west. The lieutenant governor’s office is located in the west wing, just opposite the governor’s office. On the north side of the second floor rotunda is a sculpture of George Washington astride a horse; to its rear is the attorney general’s suite of offices, which formerly housed the supreme court, until its current building opened in 1970. The east wing houses the office of the secretary of state offices, in whose reception area is the official copy of the Great Seal of the State of Idaho.

The third floor contains the Senate in the west wing and the House of Representatives in the east wing. The two chambers were remodeled in 1968. Also on this floor is the old in session. The northeast, northwest, and southwest corners of this floor contain many historic paintings, as well as three murals by Dana Boussard.

Restoration of the Capitol 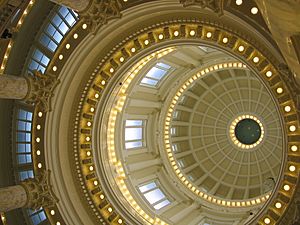 In 1998, Idaho officials drafted a master plan to restore the Capitol. Though it has many impressive features, the "Statehouse" had begun to fade with age. The interior restoration work would include restoration and refinishing of windows, repairs to marble flooring and decorative plaster, restoration of wood floors, refinishing wood doors and restoring hardware, upgrading electrical, smoke and fire-detection systems, improving exterior lighting, adding an emergency power generator, and installation of an elevator accessible to disabled persons.

The legislature initially provided a mere $120,000 for the project. In 2000, The master plan was completed and its total cost estimate put at $64 million. In 2001, the Legislature granted a one-time appropriation of $32 million; bonds were issued to cover the other half of the project. In 2002-03, crews completed Phase II of the project, which involved exterior repairs financed with a supplementary $1.5 million appropriation. In 2005, an increase in the state cigarette tax helped pay for interior restoration expenses totaling $20 million.

In 2006, the legislature voted to finance two two-story underground legislative office wings at a cost about $130 million. However, in view of the U.S. economic downturn in 2008, Governor Butch Otter proposed single-story underground wings. After legislators agreed to this modification, construction began and continued until 2010, when both interior and exterior renovations were finished.

Plasterers were tasked with restoring scagliola, a composite of selenite, glue, and natural pigments, imitating marble and other hard stones. Making scagliola is a laborious 15-step process, which has to be restarted if a single mistake is made. During its construction, the Idaho state capitol’s architects used a combination of white marble and matching scagliola to create a "Capitol of Light," so called because the materials would glow in natural light in the rotunda.

The Winged Victory statue is a plaster replica of the original marble statue of Nike of Samothrace. The original statue was found on the island of Samothrace, Greece, in 1863 by a French explorer. The statue has characteristic features of Hellenistic art. The people of France gave the replica to the United States as part of a gift after U.S. forces helped liberate France from Nazi occupation at the end of World War II. After it arrived in February 1949, state officials placed the gift in the Boise capitol.

The sculpture Statue head of Louise Shadduck honors the dedication of Idaho author, historian, civil servant, and political activist Louise Shadduck who died in 2008, at age 92. In 1958, Shadduck was elected secretary of Commerce and Development – the first woman to hold that office. The statue is made of bronze and black stone.

The capitol also houses a display of 20 portraits of Idaho territorial and state Governors completed by artist Herbert A. Collins in 1911.

Attractions in the restored and expanded building include a gilded equestrian statue of George Washington and information about the historic trees that surrounded the capitol building before the grounds were cleared for underground construction. (Presidents Benjamin Harrison, Theodore Roosevelt, and William Taft planted trees on the property; Harrison planted a Water Oak, Roosevelt planted a Sugar Maple in 1903, and Taft planted the Ohio Buckeye in 1911.) The Golden Statue was carved by Charles Osner in 1869 from white pine, the state tree of Idaho. Osner worked by candlelight and took four years to finish the work.

Details of the Capitol 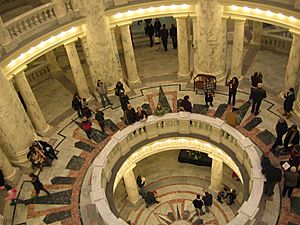 Visitors tour the restored Capitol in 2010.

Tunnels connect the Capitol Building to the Supreme Court building and other government buildings on Capitol Mall to the east. Used daily by government employees, these tunnels are not accessible to the public, and could serve as bomb shelters to protect the governor and other public officials.

A full-scale replica of the Liberty Bell (uncracked) occupies a site at the base of the stairs outside the Jefferson Street entrance. The bell is one of 53 commissioned in 1950 by the U.S. Treasury Department and presented to each of the states and is accessible to passersby who can ring it.

The capitol faces southwest and looks down Capitol Boulevard, about a mile (1.6 km) in length. At its opposite end is the Boise Depot, built in 1925 on the rim of the first bench.

All content from Kiddle encyclopedia articles (including the article images and facts) can be freely used under Attribution-ShareAlike license, unless stated otherwise. Cite this article:
Idaho State Capitol Facts for Kids. Kiddle Encyclopedia.