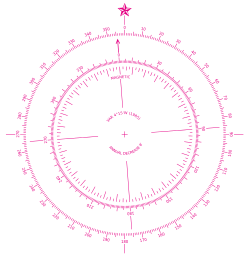 A common compass rose as found on a nautical chart showing both true north and magnetic north with magnetic variation. Also notice the correspondence between the thirty-two point rose (inner circle) and the modern 0-360° graduations

A compass rose, sometimes called a windrose, or Rose of the Winds, is a figure on a compass, map, nautical chart, or monument used to display the orientation of the cardinal directions: North, East, South, and West—and their intermediate points. It is also the term for the graduated markings found on the traditional magnetic compass. Today, the idea of a compass rose is found on, or featured in, almost all navigation systems, including nautical charts, non-directional beacons (NDB), VHF omnidirectional range (VOR) systems, global-positioning systems (GPS), and similar equipment.

The modern compass rose has eight principal winds. Listed clockwise, these are:

4-point compass roses use only the four "basic winds" or "cardinal directions" (North, East, South, West), with angles of difference at 90°.

8-point compass roses us the eight principal winds—that is, the four cardinal directions (N, E, S, W) plus the four "intercardinal" or "ordinal directions" (NE, SE, SW, NW), at angles of difference of 45°.

The 32-point rose has the uncomfortable number of 111⁄4° between points, but is easily found by halving divisions and may have been easier for those not using a 360° circle. Using gradians, of which there are 400 in a circle, the sixteen-point rose will have twenty-five gradians per point. 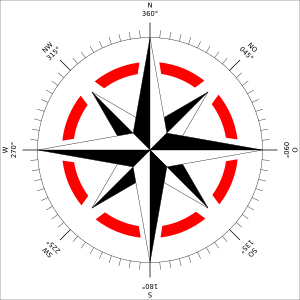 Linguistic anthropological studies have shown that most human communities have four points of cardinal direction. The names given to these directions are usually derived from either locally-specific geographic features (e.g. "towards the hills", "towards the sea") or from celestial bodies (especially the sun) or from atmospheric features (winds, temperature). Most mobile populations tend to adopt sunrise and sunset for East and West and the direction from where different winds blow to denote North and South.

The contemporary compass rose appears as two rings, one smaller and set inside the other. The outside ring denotes true cardinal directions while the smaller inside ring denotes magnetic cardinal directions. True north refers to the geographical location of the north pole while magnetic north refers to the direction towards which the north pole of a magnetic object (as found in a compass) will point. The angular difference between true and magnetic north is called variation, which varies depending on location. The angular difference between magnetic heading and compass heading is called deviation which varies by vessel and its heading.

All content from Kiddle encyclopedia articles (including the article images and facts) can be freely used under Attribution-ShareAlike license, unless stated otherwise. Cite this article:
Compass rose Facts for Kids. Kiddle Encyclopedia.