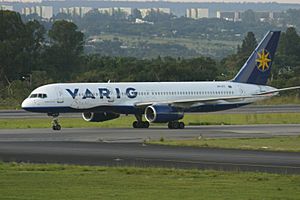 A Varig Boeing 757 at Brasília.

Varig Brazilian Airlines, also known as VARIG, was once the largest airline of Brazil. The airline declared bankruptcy in 2006. The successor to Varig is Gol Transportes Aéreos, which is technically the new Varig.

Varig began on May 7, 1927. It was founded by German emigrants in Brazil. Varig began non-stop flights between New York City and Rio de Janeiro in 1955. The airline took over many international destinations in the 1960s from bankrupt Panair do Brasil, such as Frankfurt, Lisbon and Paris. Varig eventually became the largest airline in all of South America, after it bought many other smaller Brazilian airlines. In 1997, Varig became the first airline to join Star Alliance. In 2001, TAM Airlines became the largest airline in Brazil. Then, Varig stopped flying, and it became known as another airline in 2007.

All content from Kiddle encyclopedia articles (including the article images and facts) can be freely used under Attribution-ShareAlike license, unless stated otherwise. Cite this article:
Varig Brazilian Airlines Facts for Kids. Kiddle Encyclopedia.