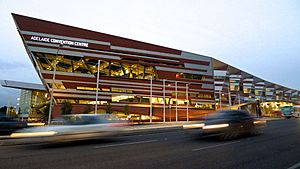 The Centre's West Building, which open in March 2015

The convention centre was designed by John Andrews and constructed over part of the Adelaide railway station, together with the Hyatt Regency Hotel (now the InterContinental Hotel), Exhibition Hall and an office block in the 1980s as part of the Adelaide Station and Environs Redevelopment (ASER) project. It has been rebuilt and extended upon a few times since its original construction in 1987. In 1999 an extension was planned and in late 2001 it was unveiled. It was designed by Larry Oltmanns who was a design partner with SOM at the time. The project won the Royal Australian Institute of Architects 2002 Awards of Merit: BHP Colourbond Steel Award, Interior Architecture and New Building.

SOM’s expansion and renovation of Adelaide’s Convention Centre reconnected historic parts of the city to the waterfront. Built on space assembled from air rights over a rail yard, the new facility shares a site with the Old and New South Australia State Parliament Houses, the Adelaide Exhibition Hall, the Festival Centre, and the Adelaide railway station - Casino. The SOM project, was completed with Adelaide architects Woods Bagot.,and conformed to the Adelaide Riverbank Master Plan. Its "rational cooking system", the largest of any convention centre in the world, is equipped to serve 4,000 dinners in 20 minutes. The centre's main Plenary Hall can house up to 3,500 people in full convention mode.

Looking over Torrens Lake, the centre is home to most of Adelaide's major conventions. It has also been the location of some significant commemorations of Australian icons. AVCon, an annual anime and video games convention has been held at the Adelaide Convention Centre since 2009 except for 2020.

An expansion was announced in 2011. Making the announcement, the Premier of South Australia at the time, Mike Rann, said that work would begin that year on the first stage of the $350 million expansion abutting the Morphett Street Bridge and be completed in 2014. Stage 1 would include a 4,300-square-metre (46,000 sq ft) multi-purpose concert space, meeting spaces and a 1000-seat ballroom over the railway tracks. Rann said Stage 2, scheduled to be completed by mid 2017, would feature a distinctive high-tech glass "arrow" structure capable of seating 3,500 people. Woods Bagot and Larry Oltmanns of Vx3 Architects.Strategists.Urban Designers were appointed as the design team for the $350 million expansion in February 2011.

All content from Kiddle encyclopedia articles (including the article images and facts) can be freely used under Attribution-ShareAlike license, unless stated otherwise. Cite this article:
Adelaide Convention Centre Facts for Kids. Kiddle Encyclopedia.