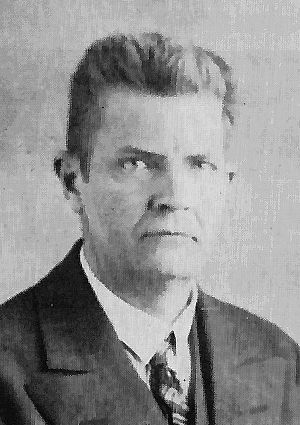 Adolf Behne (13 July 1885 – 22 August 1948) was a critic, art historian, architectural writer, and artistic activist. He was one of the leaders of the Avant Garde in the Weimar Republic.

Behne was born in Magdeburg and studied architecture briefly, then the history of art in Berlin. He joined the Deutscher Werkbund and was a guiding light of the Arbeitsrat für Kunst in 1918. In a 1913 critique of Bruno Taut, Behne helped coin the term "Expressionist architecture", and soon became one of the leading promoters of expressionism. He was close to the members of the Magdeburg artist collective 'The ball' and demanded the creation of a new closeness between art and architecture. He was influenced by the writings of Jakob von Uexküll. He taught at the University of Berlin until 1933. Between 1945 and 1948 he was a professor at the National University for Fine Arts, (Staatlichen Hochschule für Bildende Kunst Berlin) and belonged to the architect group Der Ring.

As an architect he rarely had his projects executed. However, between 1932 and 1936 he built the reception building of the main station in Düsseldorf.

He died in Berlin. His hometown of Magdeburg named a street after him (Behneweg).

All content from Kiddle encyclopedia articles (including the article images and facts) can be freely used under Attribution-ShareAlike license, unless stated otherwise. Cite this article:
Adolf Behne Facts for Kids. Kiddle Encyclopedia.