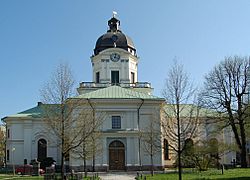 Adolf Fredrik Church (Swedish: Adolf Fredriks kyrka) is a church building in the town of Stockholm in Sweden. It belongs to the Church of Sweden. It was opened on 27 November 1774. In its graveyard, former Swedish prime ministers Hjalmar Branting and Olof Palme have been buried.

All content from Kiddle encyclopedia articles (including the article images and facts) can be freely used under Attribution-ShareAlike license, unless stated otherwise. Cite this article:
Adolf Fredrik Church Facts for Kids. Kiddle Encyclopedia.