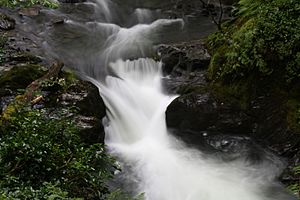 The Dulas as it passes through Aberllefenni

The Afon Dulas (also referred to as the North Dulas) is a river forming the border between Merionethshire/Gwynedd and Montgomeryshire/Powys in Wales.

It rises from a source in the hills above Aberllefenni and passes through Corris, Esgairgeiliog and Pantperthog before joining the Afon Dyfi at Ffridd Gate near Machynlleth.

The Dulas is recorded as an important land boundary in 1200, in a document written in 1428. This document describes the land owned by Einion ap Seisyllt, in the time of Llywelyn the Great, as "tota terra inter aquas de Dyfi et Delwas" (Latin, meaning: all the land between the rivers Dyfi and Dulas).

Roads and Railways in the Dulas valley

Another river also called the Afon Dulas joins the Dyfi from the south, upstream of its confluence with the North Dulas. Locally this is referred to as the South Dulas. It rises in Glaslyn, below the slopes of Foel Fadian, and passes the hamlet of Forge and Plas Dolguog before joining the Dyfi.

Close to its confluence with the Dyfi it is crossed by the Cambrian rail line on a bridge known as the Black Bridge. After the line had been repeatedly closed due to flooding after heavy rain, in 2021 it was announced that the bridge and its approaches were to be raised by a metre to try and alleviate the problem.

All content from Kiddle encyclopedia articles (including the article images and facts) can be freely used under Attribution-ShareAlike license, unless stated otherwise. Cite this article:
Afon Dulas Facts for Kids. Kiddle Encyclopedia.