Kids Encyclopedia Facts
For the flooding of the Tryweryn Valley, see Llyn Celyn. 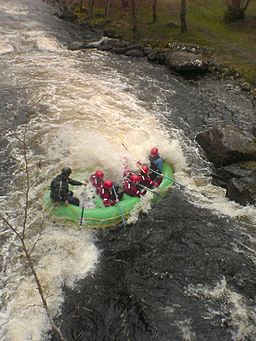 The Tryweryn is a river in the north of Wales which starts at Llyn Tryweryn in the Snowdonia National Park and after 19 kilometres (12 mi) joins the river Dee at Bala. It is one of the main tributaries of the Dee and it was dammed in 1965 to form Llyn Celyn, drowning the village of Capel Celyn in spite of much popular and political opposition in Wales. The resulting graffito "Cofiwch Dryweryn" ("Remember Tryweryn") near Llanrhystud became and remains a popular icon of Welsh feeling. Water is stored in Llyn Celyn in winter when flows are high, and released over the summer to maintain the flow in the Dee (water from the Dee is used as the water supply for large areas of north-east Wales, and for the Wirral and much of Liverpool in England.

The Tryweryn River joins the River Dee roughly half a mile downstream from llyn Tegid. The reservoir now at the head of the Tryweryn was created in 1965, to provide water to Liverpool. At that time, the 67 inhabitants of the village of Capel Celyn were forcibly removed.

The Tryweryn is the site of the Welsh Canolfan Tryweryn national whitewater centre, managed by the Welsh Canoe Association. It is an important river for whitewater kayaking and rafting. The centre features a café and facilities to support whitewater sports. The natural whitewater rapids of the upper section of the Treweryn have been modified (by placing boulders along the river bed) to make them safer and to build playspots. The upper part of the river is usually considered to be Grade III. Usually between 9 and 12 m³/s are released from the Llyn Celyn Dam. The rapids of the lower section remain in a more natural state. These are of somewhat easier grade, with the exception of Bala Mill Falls.

The regular releases from Llyn Celyn in summer mean that kayak events and trips can be planned in advance, and commercial rafting can take place. Most whitewater rivers in Wales rely on recent rain to have enough water for kayaking or rafting.

Access to the upper part of the Tryweryn is uncontroversial - this contrasts with recreational access to many of the other rivers in Wales (see Rivers Access Campaign for more information), and adds to the popularity of the Tryweryn among kayakers and rafters.

In August 2004, John Prescott, deputy prime minister, was on a rafting trip on the Tryweryn and helped to aid a kayaker who had been injured.

All content from Kiddle encyclopedia articles (including the article images and facts) can be freely used under Attribution-ShareAlike license, unless stated otherwise. Cite this article:
Afon Tryweryn Facts for Kids. Kiddle Encyclopedia.