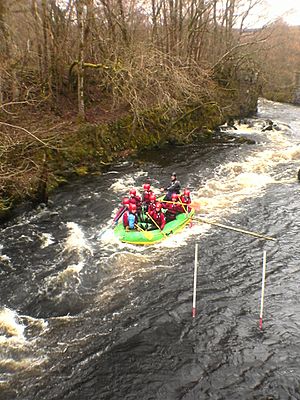 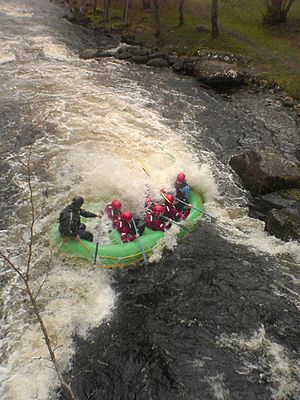 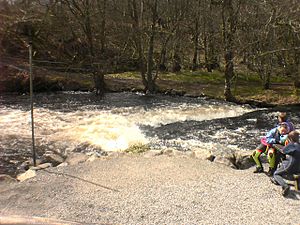 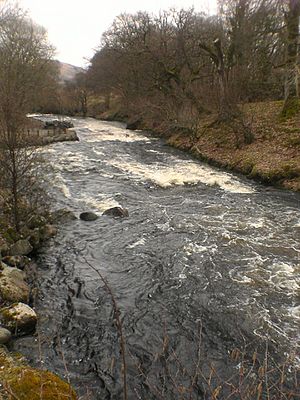 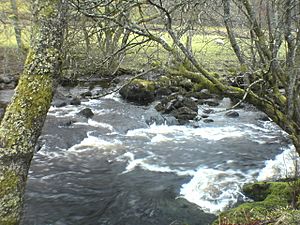 Canolfan Tryweryn is the National White Water Centre for Wales, and is based near Bala in North Wales. It developed the first commercial white water rafting operation in the UK in 1986, and since then has grown to become the largest and one of the most well-known rafting organisations in the UK. The centre is home to paddlesport National Governing Body Canoe Wales. The National White Water Centre is ideal for canoeing, kayaking, play-boating and coached groups who sometimes run BCU/CW Star Awards.

The Tryweryn is a river in north Wales. It flows from Llyn Celyn in the Snowdonia National Park and after 19 km joins the river Dee at Bala. It is one of the main tributaries of the Dee and has been dammed to form Llyn Celyn. Water is stored in winter when flows are high, and released over the summer to maintain the flow in the Dee, meaning that the river often has suitable water levels for kayakers and rafters at time of year when natural rivers throughout Wales may be too low. Usually between 9 and 12 m³/s are released by the dam.

The whitewater rapids have been modified by placing boulders in strategic points along the course of the river to create eddys, drops and play spots.

Access to the centre requires payment for both commercial and non-commercial users.

The river is generally split into three sections: Top Site, Centre Section and the Lower Tryweryn.

This constitutes the section of river leading from the setting basin below the Llyn Celyn dam along to the chipper (a metal fish trap, so called because it resembles a chip-slicer). The chipper is actually a fish-trap. The chipper screens were removed on the 13th of November 2019. This section is a nice Grade II coming onto III, with a good play-hole (the "Top-Hole") and a playful weir. The section is often used for safety and rescue courses, as well as kayaking freestyle competitions. Officially there is no raft or canoe access to this top section.

This section (commonly known as the "Upper Tryweryn") is the main part of the Tryweryn, it runs for approximately 2 km from the chipper down to the Tyn Cornel camping site, and is a good Grade III. It contains most of the main features of the river (in order of occurrence):

Running the 4 km from the Tyn Cornel campsite down to Bala, this is a good Grade II bordering on Grade III section which finishes spectacularly at Bala Mill Falls (an easily portaged Grade IV rapid). This section is not managed like the upper Tryweryn, although the centre has been known to remove fallen trees and other obstructions/hazards quickly.

All content from Kiddle encyclopedia articles (including the article images and facts) can be freely used under Attribution-ShareAlike license, unless stated otherwise. Cite this article:
Canolfan Tryweryn Facts for Kids. Kiddle Encyclopedia.