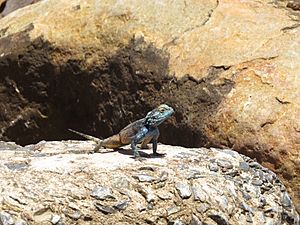 Agama atra male, showing the tympanum. Compare coloration with the picture of a female below 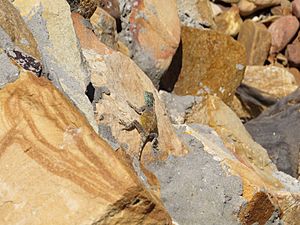 Agama (from Sranan Tongo meaning "lizard") is the name of a genus of small-to-moderate-sized, long-tailed, insectivorous Old World lizards, and also is one of their common names. The genus Agama includes at least 37 species in Africa, especially sub-Saharan Africa, where most regions are home to at least one species. Eurasian agamids are largely assigned to genus Laudakia. The various species differ in size, ranging from about 12 to 30 cm (5 in. to 1 ft.) in length, when fully grown.

Their colour also differs between species, between genders, and according to mood; for example, a dominant male in display mode is far brighter than when it has been caught, beaten by another male, or otherwise alarmed. Females tend to be less colourful than the males of the species.

According to species, agamas live in forest, in bush, among rocks and on crags, but where their habitat has been cleared, or simply invaded by humans, some species also adapt to life in villages and compounds, for example inside the thatch of huts and other sheltering crevices. Agamids' hind legs generally are long and powerful; and the lizards can run and leap swiftly when alarmed.

Agamas are diurnal, active during the day. They can tolerate higher temperatures than most reptiles, but when temperatures approach 38 °C (100 °F) they generally shelter in the shade. Males frequently threaten each other by nodding, weaving, and displaying their brightest colours to establish dominance. If that is insufficient, they lash their tails and threaten each other with open jaws. The jaws are very powerful, and older males commonly have damaged tails as souvenirs of past combat. Females may sometimes chase and fight one another, and hatchlings mimic the adults' behaviour.

Agamas are mainly insectivorous, hunting prey by sight and snatching it opportunistically. Their incisor-like front teeth and powerful jaws are adapted to dealing with quite large, hard prey. They also may eat eggs of other lizards, and sometimes feed on vegetable matter, such as suitable grass, berries, and seeds.

Though not formally polygamous, dominant males commonly accommodate several females at a time in their territory. During courtship, and also when asserting his territory, the male bobs his head in display; this gives rise to some of the common names, such as Afrikaans koggelmannetjie (literally, "little mocking man"). Females occasionally initiate courtship by offering their hindquarters to the male and provoking him to catch her. Typically the breeding season is timed for eggs to be laid during the season after the rains. Eggs are laid in clutches of up to 12, depending on species and the size of the female.

All content from Kiddle encyclopedia articles (including the article images and facts) can be freely used under Attribution-ShareAlike license, unless stated otherwise. Cite this article:
Agama Facts for Kids. Kiddle Encyclopedia.