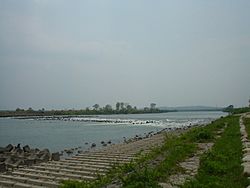 The Agano River (Aganogawa) is a river which flows from Fukushima Prefecture to Niigata Prefecture in Japan. It is called the Aga River or the Ōkawa River in Fukushima. It is 210 km long with 7,710 km² watershed.

In 1927, the Agano River was recognized as one of the 100 Landscapes of Japan which best showed Japan and its culture in the Shōwa period.

In 1964, a chemical factory at Kanose village in Niigata Prefecture released methyl mercury into the river and this caused the Niigata Minamata disease.

All content from Kiddle encyclopedia articles (including the article images and facts) can be freely used under Attribution-ShareAlike license, unless stated otherwise. Cite this article:
Agano River Facts for Kids. Kiddle Encyclopedia.