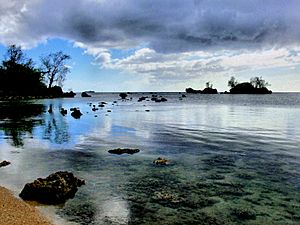 Agat Bay is a bay on the west coast of Guam. Its northern boundary is the Orote Peninsula, occupied entirely by Naval Base Guam, which itself lies within the village of Santa Rita. The bay stretches south along the coast of the village of Agat to Facpi Point. With a length of some seven kilometers, the bay stretches for nearly one fifth of the west coast of Guam. The Asan Invasion Beach of the 1944 Battle of Guam is commemorated by the Agat Unit of War in the Pacific National Historical Park, which spans surce and subsurface areas from Apaca Point to Bangi Point. The NRHP-listed Agat World War II Amtrac is submerged off Agat Cemetery.

The northern part of the bay is protected by an offshore reef. Blue Hole, one of Guam's most popular scuba diving sites, is located in the northwest corner of the bay. Further south is Nimitz Beach, a popular snorkeling spot containing the small offshore Anae Island.

All content from Kiddle encyclopedia articles (including the article images and facts) can be freely used under Attribution-ShareAlike license, unless stated otherwise. Cite this article:
Agat Bay Facts for Kids. Kiddle Encyclopedia.