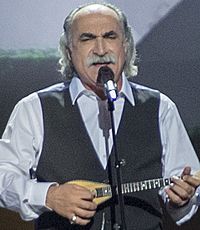 Agathonas Iakovidis (Greek: Αγάθωνας Ιακωβίδης; 2 January 1955 – 5 August 2020) was a Greek folk singer and musician. He represented Greece in the Eurovision Song Contest 2013 with Koza Mostra and the song "Alcohol Is Free". He was born in Langadas, Thessaloniki. His career began in 1971.

All content from Kiddle encyclopedia articles (including the article images and facts) can be freely used under Attribution-ShareAlike license, unless stated otherwise. Cite this article:
Agathonas Iakovidis Facts for Kids. Kiddle Encyclopedia.