Kids Encyclopedia Facts
Not to be confused with Eupatorium altissimum.

Ageratina altissima, also known as white snakeroot, richweed, or white sanicle, is a poisonous perennial herb in the family Asteraceae, native to eastern and central North America. An older binomial name for this species is Eupatorium rugosum, but the genus Eupatorium has undergone taxonomic revision by botanists, and a number of the species that were once included in it have been moved to other genera.

Plants are upright or sometimes ascending, growing to 1.5 metres (4.9 ft) tall, producing single or multi-stemmed clumps in mid to late summer and fall. The flowers are a clean white color and after blooming, small seeds with fluffy white tails are released to blow in the wind. They are found in woods and brush thickets where they bloom mid to late summer or fall. The species is adaptive to different growing conditions; it is found in woods and brush thickets and also in shady areas with open bare ground, and can be weedy in shady landscapes and hedgerows. There are two different varieties: Ageratina altissima var. altissima and Ageratina altissima var. roanensis (Appalachian white snakeroot); they differ in the length of the flower phyllaries and shape of the apices.

White snakeroot contains the toxin tremetol; when the plants are consumed by cattle, the meat and milk become contaminated with the toxin. When milk or meat containing the toxin is consumed, the poison is passed on to humans. If consumed in large enough quantities, it can cause tremetol poisoning in humans. The poisoning is also called milk sickness, as humans often ingested the toxin by drinking the milk of cows that had eaten snakeroot. Although 80% of the plant's toxin, tremetone, decreases after being dried and stored away for 5 years, its toxicity properties remain the same. 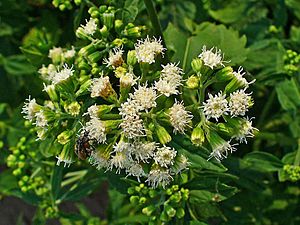 During the early 19th century, when large numbers of European Americans from the East, who were unfamiliar with snakeroot, began settling in the plant's habitat of the Midwest and Upper South, many thousands were killed by milk sickness. Notably, milk sickness was possibly the cause of death in 1818 of Nancy Hanks Lincoln, mother of Abraham Lincoln.

It was some decades before European Americans traced the cause to snakeroot, although today Dr. Anna Pierce Hobbs Bixby is credited with identifying the plant in the 1830s. Legend has it that she was taught about the plant's properties by a Shawnee woman. The Shawnee woman's name is lost to history, but she and her people doubtless had deep knowledge of the plants in the area.

In addition to cattle, the plants are also poisonous to horses, goats, and sheep. Signs of poisoning in these animals include depression and lethargy, placement of hind feet close together (horses, goats, cattle) or held far apart (sheep), nasal discharge, excessive salivation, arched body posture, and rapid or difficult breathing.

This plant may serve medicinal purposes. Root tea has been used to treat diarrhea, kidney stones, and fever. A root poultice can be used on snakebites.

A cultivar, sold under the name Eupatorium rugosum 'Chocolate', is grown in gardens for its dark-tinted foliage. The darkest color, which is a chocolatey black, occurs in plants grown in a sunny location. The plants are shade-tolerant and do best in moist soils. More recently, the plant can be found under the correct species name.

Ageratina is derived from Greek meaning 'un-aging', in reference to the flowers keeping their color for a long time. This name was used by Dioscorides for a number of different plants.

Altissima means "the tallest", and probably indicates that this is the tallest species in its genus.

All content from Kiddle encyclopedia articles (including the article images and facts) can be freely used under Attribution-ShareAlike license, unless stated otherwise. Cite this article:
Ageratina altissima Facts for Kids. Kiddle Encyclopedia.