Aghalurcher (Irish: Achad-urchaire, Achad-lurchaire , meaning Field of the Cast) was a pre-Norman monastery located east of the shore of upper Lough Erne, County Fermanagh, Northern Ireland, founded according to legend by Saint Ronan in the sixth to early seventh century and dedicated to him in the ninth century. The site includes the ruins of a medieval church with a small gated vault (locked) — where sculptural fragments are stored — and a gateway constructed with stones from the church. The church was remodelled in 1447 with a new roof added.

The site includes some interesting gravestones of the late eighteenth century, plus an early medieval carved head on the gateway. Additional sculptural fragments from the site are at the Fermanagh County Museum at Enniskillen Castle. 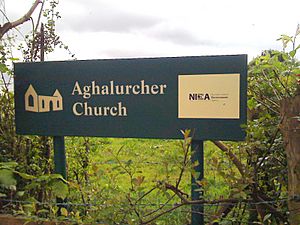 Aghalurcher signpost on east side of Newbridge Road

All content from Kiddle encyclopedia articles (including the article images and facts) can be freely used under Attribution-ShareAlike license, unless stated otherwise. Cite this article:
Aghalurcher Monastery Facts for Kids. Kiddle Encyclopedia.