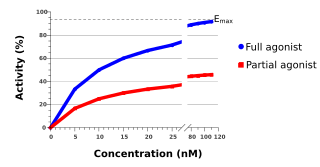 An agonist is a type of chemical known as a ligand. It binds to a receptor. It activates (switches on) the receptor to produce a response.

This is typical of the systems which regulate the body. Being able to control activity is the basis of homeostasis.

A substance which causes the same bodily responses, but does not bind to the same receptor is called a physiological agonist.

All content from Kiddle encyclopedia articles (including the article images and facts) can be freely used under Attribution-ShareAlike license, unless stated otherwise. Cite this article:
Agonist Facts for Kids. Kiddle Encyclopedia.