Agriculture in Pakistan facts for kids 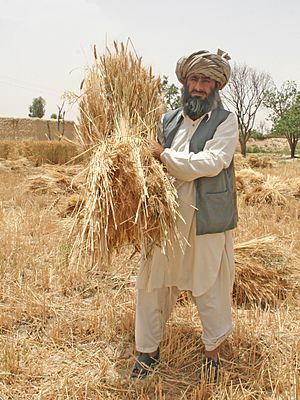 a common farmer in rural Pakistan 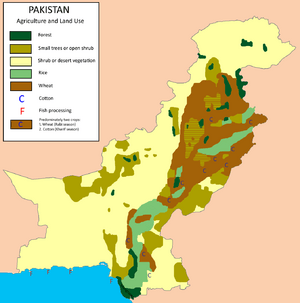 Agriculture and land use in Pakistan. (Only major crops)

Pakistan's principal natural resources are arable land and water. About 25% of Pakistan's total land area is under cultivation and is watered by one of the largest irrigation systems in the world. Pakistan irrigates three times more acres than Russia. Agriculture accounts for about 23% of GDP and employs about 44% of the labor force. Pakistan is one of the world's largest producers and suppliers of the following according to the 2005 Food and Agriculture Organization of The United Nations and FAOSTAT given here with ranking:

Pakistan ranks fifth in the Muslim world and twentieth worldwide in farm output. It is the world's fifth largest milk producer. Agriculture is the back bone of Pakistan's economy.

All content from Kiddle encyclopedia articles (including the article images and facts) can be freely used under Attribution-ShareAlike license, unless stated otherwise. Cite this article:
Agriculture in Pakistan Facts for Kids. Kiddle Encyclopedia.