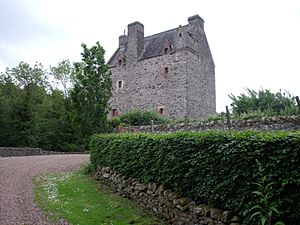 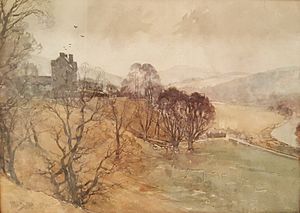 Aikwood Tower (also known as Oakwood Tower) is a 16th-century tower house in the Scottish Borders area of Scotland, 4 miles (6 kilometres) southwest of the town of Selkirk, on the Ettrick Water. The tower is a Category A listed building.

The tower was built in 1535, but in the late 18th century it was abandoned as a dwelling and was used as a store on the adjoining farm. The building was restored in the early 1990s by the former Liberal Party leader David Steel. He and his wife lived there for twenty years from 1992 to 2012, when they bought a three-bedroom flat in Selkirk better suited to their needs, where they still live. Aikwood Tower is now administered by Steel's son Rory and his wife.

All content from Kiddle encyclopedia articles (including the article images and facts) can be freely used under Attribution-ShareAlike license, unless stated otherwise. Cite this article:
Aikwood Tower Facts for Kids. Kiddle Encyclopedia.