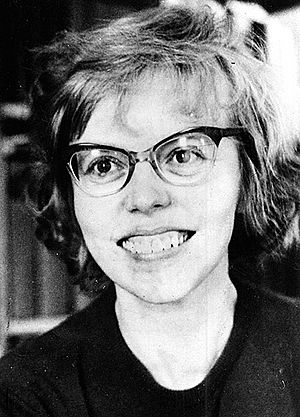 Aila Meriluoto (10 January 1924 – 21 October 2019) was a Finnish poet, writer and translator. She was born in Pieksämäki, Finland. She became the most celebrated and widely read female poet of post-war Finland. The themes of her poems were art and femininity. In collection Pahat unet (1956) some of the poems have a free form. The next collection, Portaat, came five years later.

In addition to poems, Meriluoto wrote novels, and books for young people. She has translated works by Harry Martinson, Rainer Maria Rilke, Shakespeare and Goethe.

All content from Kiddle encyclopedia articles (including the article images and facts) can be freely used under Attribution-ShareAlike license, unless stated otherwise. Cite this article:
Aila Meriluoto Facts for Kids. Kiddle Encyclopedia.