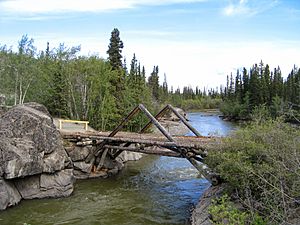 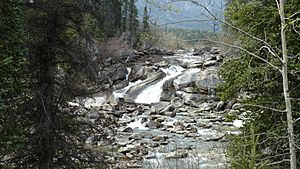 The Aishihik River, also known as Canyon Creek, is a river in the Yukon Territory of Canada. Originating in Aishihik Lake, it flows south into the Dezadeash River, part of the Alsek River watershed.

Otter Falls, located on the Aishihik River, were pictured on the reverse of the 1954 series of Canadian $5 bills. Flows on the northern portion of the river, including Otter Falls, are considerably reduced because of a hydroelectric dam and station owned by the Yukon Energy Corporation. The Aishihik Road mainly follows the river.

All content from Kiddle encyclopedia articles (including the article images and facts) can be freely used under Attribution-ShareAlike license, unless stated otherwise. Cite this article:
Aishihik River Facts for Kids. Kiddle Encyclopedia.