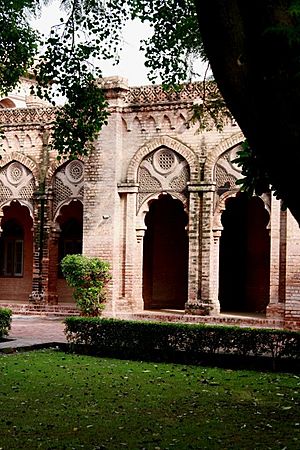 A view of the boarding rooms at Aitchison College, Lahore

The Aitchison College is Pakistan's most prestigious school and college. It is in the old and historical Punjabi city of Lahore. The school was started during British colonial rule, in 1886. It was first called the 'Punjab Chiefs' School and College'. It is named after Sir Charles Umpherston Aitchison, who was Lieutenant Governor of the Punjab. Only boys aged 4 to 19 go there.

All content from Kiddle encyclopedia articles (including the article images and facts) can be freely used under Attribution-ShareAlike license, unless stated otherwise. Cite this article:
Aitchison College Facts for Kids. Kiddle Encyclopedia.