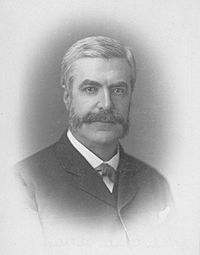 Sir Charles Umpherston Aitchison (1832 – 1896), was a British Indian administrator. He was Lieutenant-Governor of the Punjab from 1882 to 1887. He was of Scottish origins.

He is specially remembered today for founding the Aitchison College, Lahore (now in Pakistan) in 1886. He also played an important role in supporting the earlier establishment of the University of the Punjab in 1882, on the recommendation of Dr Gottlieb Wilhelm Leitner.

Aitchison later also was Chief Commissioner of the British Crown Colony of Burma from 1878 to 1880.

All content from Kiddle encyclopedia articles (including the article images and facts) can be freely used under Attribution-ShareAlike license, unless stated otherwise. Cite this article:
Charles Umpherston Aitchison Facts for Kids. Kiddle Encyclopedia.