Ak-Chin Pavilion (originally known as the Desert Sky Pavilion) is an amphitheater located in Phoenix, Arizona, which seats 8,106 under a pavilion roof and an additional 12,000 on a hillside behind the main stands. It opened on November 11, 1990 (Billy Joel was the venue's inaugural performer). The naming rights sponsor is the Ak-Chin Indian Community (the venue is not located on tribal land). With a total capacity of 20,000, its capacity is higher than Talking Stick Resort Arena and Gila River Arena. The amphitheater's season starts in April and closes in October.

The U.S. syndicated game show Wheel of Fortune taped two weeks in January 1997 and airing across the country in February 1997. This taping session is most notable for the retirement of the old trilon-based puzzleboard, the new electronic puzzleboard would make its debut the next week back at the show's home base at Sony Pictures Studios. 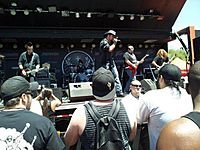 Back to Ashes performing at Mayhem Festival 2011

The lawn at the amphitheater contains several video screens.

The amphitheater has been used to hold many famous concerts and tours, especially in the summer months of July and August, it has hosted Nine Inch Nails, Van Halen, Bon Jovi, Metallica, The Vote for Change Tour, The Vans Warped Tour, The Gigantour, Lollapalooza, Lilith Fair, Crüe Fest, Ozzfest and Projekt Revolution. It has hosted the Phoenix date of the annual Mayhem Festival since the tour's inception in July 2008.

Fall Out Boy recorded their live album, Live in Phoenix, at the amphitheatre on June 22, 2007.

Fall Out Boy & Paramore brought their co-headlining tour, MONUMENTOUR to The Pavilion on August 8, 2014 with New Politics as the opening act. Lana Del Rey, accompanied by Courtney Love, brought her Endless Summer Tour to The Pavilion on May 14, 2015.

All content from Kiddle encyclopedia articles (including the article images and facts) can be freely used under Attribution-ShareAlike license, unless stated otherwise. Cite this article:
Ak-Chin Pavilion Facts for Kids. Kiddle Encyclopedia.